In a cultural landscape where non-white voices are often expected to represent or speak for everyone who looks like them, Jessie Tu is simply telling one story.

Jessie Tu’s A Lonely Girl is a Dangerous Thing is a stressful book if, like me, you often find yourself vicariously experiencing the stress and confusion of characters on the page as your own.

Here is the story of Jena, a former child star who gave up on her career at 14 years of age, only to spend her early adult life toying with the idea of performing as a solo violinist once again – or settling for less than what she knows she’s capable of. Added to all that is the ongoing fallout of being exposed to the world at such a young age, finding sex to be your only refuge from emptiness, and seeking both pain and affection from the bodies of others but never finding it. It all feels painfully relatable, even though Jena’s experiences bear no resemblance to my own (none at all – did you hear that, Dad? None, I promise).

Such raw honesty often had me wondering, in true concerned auntie  style, “Are Tu’s parents ever going to read this?” But this is exactly what makes it so refreshing. I spent the entirety of the book wondering if Jena would ever stop sabotaging her relationships, if, by the end of the book, she would emerge a different character to the Jena we started with. In some ways she did, but not in the heroic sense that we often expect – particularly from characters of colour.

There was no great victory where Jena has learned all the right lessons and rebuilds all of the bridges she’s burned. Perhaps the most significant transformation was Jena’s relationship with her mother; this is something that unfolds toward the end of the story and still feels unresolved in many ways, but still feels so real.

There are still few complex women of colour in Australian literature. Women of colour that we’re not asked to look at with pity or admiration. Even rarer are those whose stories include intimate details. As a POC writer, I find that I’m so conscious about the way that I tell our stories, whether it’s about putting our best suit on, or feeling as though we must have a purpose or an angle to the characters we bring to life. It’s almost as though we have one opportunity to represent ourselves, and those who look like us, that we can’t let it go to waste. We have to tell the world… something.

So, I waited for the expected over-explanations of the role race and identity played in Jena’s friendships and intimate relations. They never came – this was not written to educate anyone. For those readers who are conscious and interested in how inseparable one’s race is from one’s daily experience, it leaves a lot to the imagination and further analysis. But for those who are not, you don’t have to.

Tu doesn’t ask us to assess the ‘Asian experience’ or understand an Asian woman. We are simply reading Jena’s story, a character whose most complex, and perhaps most socially unacceptable traits, are exactly the ones that are most relevant to twentysomethings right across Australia.

This review was commissioned by Writers SA as part of A Year in Review, a literary criticism initiative in partnership with The Adelaide Review and supported by the Australia Council for the Arts. Find out more here. 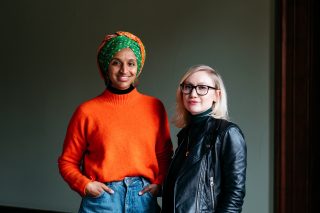 Victoria Hannan on Kokomo, home and relationships:
‘I wanted to write a love letter to friendship’