A woeful trail of cancelled shows brought the arts to their knees this year, but there is one final opera left standing.

This is Summer of the Seventeenth Doll by Peter Goldsworthy and Richard Mills, part of State Opera SA’s Lost Operas of Oz series. It will be unveiled in November as a new production in the sumptuously refashioned Her Majesty’s Theatre.

Based on Ray Lawler’s landmark play of the same name, this thoroughly Australian opera is a tale about ordinary knockabout folk in the immediate postwar years, and about how two sides of the national psyche collide. Embodying all that is legendary about Aussie outback life, a pair of tough-talking cane cutters from north Queensland named Roo and Barney are thrust into the urbanised world of inner Melbourne during their offseason, with unfortunate consequences. We learn only too well how the good times are ephemeral, summers are finite, and reality has a bad way of killing dreams.

“The Doll is ultimately about loss and the way life’s chances pass you by,” says State Opera’s artistic director, Stuart Maunder. “The opera sits directly alongside the play as different pieces, but they both share that same elegiac feel of Australia as it existed in that coming-of-age period in the 1950s; and they allow you to see right inside the characters and recognise oneself in them.”

Having lain dormant since its premiere in Melbourne in 1996, the opera Summer of the Seventeenth Doll will see two members of the original production return to the stage in November. They are mezzo-soprano Elizabeth Campbell, who previously played one of the two barmaids, Pearl, but who this time sings the irascible role of Emma, whose cramped home in Carlton is where the action takes place. Composer-conductor Richard Mills returns to the podium, but this time directs the Adelaide Symphony Orchestra.

The immediate concern is how to get Mills and two other cast members – Antoinette Halloran as the other barmaid, Olive, and Dimity Shepherd as Pearl – across from Melbourne under the present travel restrictions. “We are trying for an exemption,” Maunder says.

“It should be fine, because we are prepared to get them to quarantine. If we don’t put a peg in the sand in this, we’re just going to be doing nothing. We’ve got to move on. The thing that’s hard is that, for a boy who used to always pride himself on getting his essays in before the due date, I find these times extraordinary, because you cannot plan for anything, as things are changing on a daily basis. It starts to do your head in, really, but as a company you need to be flexible and roll with the punches.

“The joy is that we will be back on stage again in that gloriously rebuilt theatre.”

Joseph Mitchell is directing. Erstwhile artistic director of OzAsia, and having directed Peter Wesley Smith’s Boojum! for State Opera last year, he emphasises how every aspect of this restaging of Summer of the Seventeenth Doll is being rethought from the ground up.

“This will be a completely new production and we are taking an entirely new approach. The set is being built here in Adelaide. The designer (Simone Romaniuk) and I are based here, and more than half the cast is local. We’re bringing our own vision to this work.”

Mitchell expands on how Summer of the Seventeenth Doll, both as a play and opera, gains its power from the opposite worlds it paints. Olive is dreamy-eyed about Roo’s outback manliness, but all her idealism for him comes crashing down when he loses his job and is forced to find work in a paint factory. Roo, on the other hand, feels he is making all the right moves that are needed to secure their life together. Meanwhile, Barney is happy just chasing as many women as he can, but he finds that with increasing years his fancy-free lifestyle is wearing thin.

“These characters confront their different views of life and then see them implode over the course of the play. I think that’s the beauty of this script. I don’t think it ever tries to answer their dilemmas. Rather, it presents the tragedy of it all.

“So our approach is to focus on this idea of tragedy and explore how people balance fantasy against real life. Whether it is the 1950s or today, it’s the same because this is essentially about human nature.”

Lawler’s play required much reworking in order to adapt it to an opera libretto, and Mitchell has great admiration for how Goldsworthy accomplished this. The result, he says, is something that is both new and recognisably the same.

“What is wonderful about Peter’s libretto is that he uses original language inspired by Lawler’s script. If you look at them side by side, you’ll see he has taken thematic words out and reconfigured them in his own language. It’s very much his writing.”

Maunder agrees. “Peter Goldsworthy, I think, has done a masterful interpretation of the play.”

They have equal praise for Mills’ score. Kaleidoscopically colourful, it recreates a 1950s urban soundscape in a sophisticatedly modern style. Maunder describes the music as “full of the sounds of Australia” and radiantly lyrical when characters step forward to sing arias “that let you see inside their souls”.

Mills’ ability to depict scenes in exquisite sonic detail is what draws Mitchell in.

“What I love is that he really gives a sense of the original time of the play,” he says. “We even hear the bells of the trams going past. The music has a fun-filled lightness that really helps us understand that it’s summer, it’s Melbourne, and this is Olive’s world. I think Richard’s score really captures that sense of time, place and mood.”

Emotions are magnified as each character’s flaws come into view, and Mitchell believes this operatic version gives particular insight into the transformations that take place.

“It is a really interesting opportunity to look again at the original story in a different way, and in the process discover many things about ourselves,” he says.

It certainly promises to be a Doll to remember, not least of all because it brings some degree of normality back to the arts calendar since March.

“The Doll is the one piece that we have saved from our 2020 season,” says Maunder. “And as terrifying as that sounds, that’s something to really celebrate. I think people will love it.” 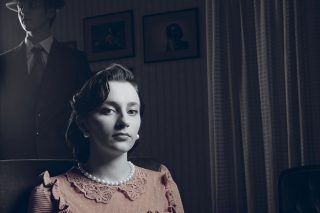 Summer of the Seventeenth Doll