Japan has a poetic, almost visceral relationship with its famous peak, Mount Fuji, the subject of a multimedia exhibition featuring in OzAsia Festival this year.

For this year’s OzAsia Festival, the Samstag Museum of Art in association with the Adelaide Film Festival will present the work of Fiona Tan, whose practice intersects with art and cinema. At the centre of the exhibition is Tan’s major work Ascent − a meditation on Mount Fuji over the past 100 years and Japan’s ongoing relationship with the mountain.

“This exhibition comes out of Samstag’s long-standing partnership with the Adelaide Film Festival to present works that sit on the cusp between cinema practice and visual arts,” says Erica Green, director of Samstag. “Ascent is conceived as both a cinema experience and a gallery installation, which is one of the reasons we were interested to present Tan’s work here at Samstag with the Film Festival.”

Tan was born in Indonesia and raised in Australia before she moved to the Netherlands in 1988, where she has lived ever since. Much of her practice focuses on notions of identity, memory and history. This is particularly evident in Ascent, which looks at the immeasurable cultural and symbolic significance of Mount Fuji and all the many images that exist of it.

Ascent includes a 77-minute film created using a compilation of photographs of Mount Fuji sourced from the archives of contemporary and historical images at the Izu Photo Museum, which is located at the base of the mountain. She also sent a call-out to the public to send in photographs they had of Mount Fuji. Her goal was to have at least 3776 (the height in metres of Mount Fuji). She exceeded this target and ended up with literally a ‘mountain’ of images. Tan then painstakingly selected from this broad archive of photographs to construct a fictional narrative.

In order to create a full cinematic experience, Tan composed a soundscape to accompany the images, comprising various sounds, music and two scripted voices (one in English and one in Japanese). The voices are of a European woman talking to her deceased Japanese lover – he climbs the mountain and she follows him at a distance. The narrative unfolds as a love story that considers many points of history as well as cultural aesthetics along the way.

Tan was initially hesitant about creating a work about Mount Fuji because it’s so iconic and there is so much history and culture associated with the mountain, but she became intrigued with the idea that, while so many people have photographed it, it still remains out of reach. The mountain is always there but can never really be fully captured. It is a void that is trying to be filled but never quite grasped.

Ascent is about a mountain and taking a journey from a lower to a higher state. It’s not only a reflection on Mount Fuji – a mountain of great significance to the Japanese people – it is also one of Tan’s most poignant and ethereal works 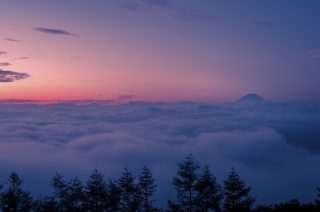