In post war England the Kindred of the Kibbo Kift movement sought to inspire world peace through camping and craft. A century later the movement has informed a new exhibition of studio work from erstwhile street artist David Booth [Ghostpatrol].

It has been 15 years since David Booth (aka Ghostpatrol) shifted his focus from street art to his studio practice and 10 years since he started exhibiting in Adelaide with Hugo Michell Gallery. In his latest exhibition, Hello Blue Sky, he looks back on the exhibitions he has had there over the last 10 years.

“Without giving too much away I know the space really well because I have shown there a lot and seen how other artists change the space,” says Booth. “I have my own ideas about how I’m going to transform it and make it look different for the people who visit that gallery for every show.”

While Booth’s artistic career is diverse and includes a commercial practice which stretches between commercial projects, public art, teaching and experimental music, his focus these days is on his studio practice, which mainly consists of drawing, painting and sculpture. Booth built his artistic reputation as a street artist in the early 2000s under the pseudonym Ghostpatrol and the name has stuck.

“I wish there was a really catchy story about why I have it but there’s not – it came from when I was involved in street art and it has hung around. There are some people who only know me by that name,” says Booth. “I wish I had given it more thought when I picked it, it was almost 20 years ago and I didn’t think I would still have to answer for it.”

The exhibition title, Hello Blue Sky comes from a group in England in the 1920s known as Kibbo Kift : a camping, hiking and handicraft group with ambitions to bring world peace. The phrase was one of their positive and upbeat greetings.

“I’m interested in their iconography and the weird culture they had. They tried to have a Utopian vision of positivity and a strong connection to nature,” explains Booth. “I have romanticised it a bit but some of their words are still relevant today.”

Hello Blue Sky encompasses this positivity with Booth using his practice as an escape when life gets too heavy. “Most of the work is fairly positive. It’s not direct, as in a political statement or there isn’t a deep dark feeling about each work – there is more of a positive vibe,” says Booth. “I like to make it welcoming and open to other people.”

Hello Blue Sky is similar to Booth’s previous exhibition at Hugo Michell Gallery, Drift Time in that it delves into Booth’s memories and premonitions. He creates an alternate world occupied by characters and scenes from across history, fantasy, nature and his own lived experience.

While the work has a personal element to it this is not intentional. Booth says, “I’m not trying to think about it too much. I’m trying to make personal work without thinking of it as being personal. Instead, I am focusing on how to make it relevant to other people.” 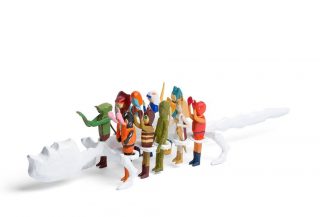