The exhibition explores the output of artists past and present from the Hermannsburg community west of Alice Springs, where the prolific artist Albert Namatjira painted the watercolours of the landscape that propelled him to international fame.

As Australia’s most celebrated Aboriginal artist, Namatjira’s talent landed him in a world of contradictions and tensions in which he was both admired and ostracised, wealthy yet, for a long time, unable to buy land for his family to establish a home away from the trauma inflicted by the Hermannsburg Lutheran Mission.

Even Namatjira’s masterful watercolours existed somewhere in this peculiar disjunctive. His painting style was founded on European techniques taught to him by painter Rex Battarbee, who visited the region in 1934 and later returned as a supporter and advocate of the Hermannsburg School of artists.

Namatjira developed a singular visual language that borrowed from western painting traditions but expressed his people’s vivid spiritual devotion to the red mountain ranges and wide plains of Tjoritja. These painterly homages to the desert were hung in gilded frames in city galleries by white men. For a man whose culture was grounded in deep familial connections, being catapulted to the uppermost heights of the Australian art world must have been a bizarre and, at times, isolating experience.

Namatjira and his wife, Rubina, were the first Aboriginal people to be granted Australian citizenship in 1957. Yet, soon after this he was accused of supplying alcohol to non-citizens within the community (a charge he denied) and was imprisoned for two months. Shortly after his release, at the age of 57, Namatjira died.

Western Arrernte woman and curator-in-residence of the exhibition, Marisa Maher has pieced together a vibrant and thoughtful exhibition that draws connections between contemporary works from a new generation of Hermannsburg artists and the historic works by Namatjira and his contemporaries from the collections of AGSA and Flinders University.

“The artworks are arranged based on the landscape or region that the artists are painting, which was a nice way to show some of the first-generation painters alongside established and emerging artists,” says Maher. During early planning for the exhibitions, Reece and Nic Brown, collections curator at Flinders University, travelled to Hermannsburg to meet with Maher, who is assistant manager at Iltja Ntjarra Many Hands Art Centre and has her own family connections to the region. “My grandmother and mother were born in Hermannsburg and I also grew up there,” she says.

“My grandmother was the younger sister of the artists Reuben, Edwin and Otto Pareroultja and she spent a lot of time around Albert as well.” Reece and Brown travelled with printouts of several important works from early Hermannsburg artists that the community had never seen before. “The people we spoke with were so proud that their relatives’ work is so highly valued and that they were painting in that style and continuing that tradition,” says Reece.

“We left the printouts with them and were happy that they had this new visual dictionary for inspiration as well.”

Among dozens of artists included in the exhibition are Namatjira’s living granddaughters Gloria Panka and Betty Naparula Wheelerand his great-granddaughter Benita Clements, whose recent work juxtaposes traditional Hermannsburg landscapes with symbols from contemporary culture (think, for example, of the Google logo embedded into Tjoritja like the Hollywood Hills sign).

The celebrated painter Ivy Pareroultja is hung in the same room as her father, Edwin Pareroultja, who was Namatjira’s contemporary and Mahler’s great uncle. Nearby is another highlight: the work of senior artist Mervyn Rubuntja, who moved to Hermannsburg at the age of 13 where he observed his uncles Maurice, Oscar and Keith Namatjira carrying on their father’s visual legacy.

Like many gifted people who belong to social minorities, Namatjira’s talent would become his Achilles heel. He was rewarded for his gifts one day by the same hand that cruelly punished him the next. But Tjina Nurna-ka, Pmarra Nurna-kanha, Itla Itla Nurnakanha does not linger too long on the sadnesses and injustices of Namatjira’s life. Instead, it bravely celebrates a great and ever-expanding legacy that is very much alive and thriving. 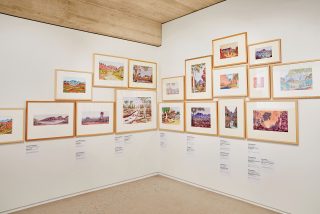