Jes Fan:
art from the peripheries

New York-based artist Jes Fan discusses identity, inspiration and the intersection of art and science ahead of his upcoming lecture as part of the Perspectives series.

Your Perspectives lecture is titled Leakages, Puddles, Discharge, Infections and Bubbles, a collection of things that make people feel uncertain or uneasy. Can you tell me about the part these spillages and hazards play in your work as an artist?

It’s funny, when I named the lecture, I had no idea that the coronavirus was coming, but now these words have taken on more hazardous associations. The question of how to protect yourself as an individual, within a completely contained bubble, is a big concern for people all around the world, who are wearing gloves on the trains, covering all their orifices in public. Going through coronavirus in the age of social media is extremely different from what we went through with SARS before viral media.

I’ve been thinking a lot about this… I realised that it was only after SARS that we started packaging fruits in plastic wraps. What I’m trying to say is that we’re thinking of ourselves as insulated beings or trying to achieve this idea of a sort of hygienic capsule. I want to challenge this in my work. We are all more exposed to each other than we would like to think, and the coronavirus kind of proves that.

You’re a queer artist of colour, working in the United States in divisive and turbulent times. Does this affect the kind of work you’re compelled to make?

I’m definitely not a political artist. I hesitate to hyphenate my role as an artist and I push back whenever there’s an article that underscores my identity as an artist with labels such as trans or Asian or queer. I am an artist and make work wherever my ideas take root. If you think about an artist like Donald Judd people don’t associate his work with his background of being an engineer or his being a white cis white male as the source of why he makes these white cubes. But somehow to understand my work, it must be contextualised with my biography and it really accentuates how wide the gulf is. I have a lot of reservations about that.

You were born in Canada and spent your formative childhood years in Hong Kong. Does this give you a different perspective on what’s unfolding in the United States?

I was born in Canada because my parents immigrated due to fear of the handover. My dad doesn’t speak fluent English and quickly realised that jobs he’d get there would not satisfy his ambition. So, we moved back to Hong Kong where I spent most of my childhood. I distinctively remember the experience of moving to the US. I went to school in Providence and realised that I was now part of the minority. Growing up as an Asian in Hong Kong, I was part of the majority but here I became part of the other.

Was art a part of your childhood?

I don’t think I grew up a lot around art. I grew up in malls and watching television. My grandfather on my mother’s side is a huge antique collector and my dad is an interior design fanatic. I think some of that interest was picked up through osmosis.

Your work often fuses objects or ideas together in unexpected ways. You’ve created hairbrushes connected by a long rope of hair in place of bristles or human organs connected via an organised network of tubes. I think there is something unsettling in these disjuncts. What draws you to recasting familiar objects in an uncertain light?

I think it’s just a combination of coincidence and imagination. One of the works you mentioned, Visible Woman, came from me wandering near my neighbourhood in Red Hook and finding this old toy of the same name. It was a biology teaching kit containing the part of the visible woman. There’s also a version of the visible man, but the visible woman version has a foetus in it. That fascinated me. It suggested so many questions. What constitutes womanhood? What makes a woman visible? I decided to select versions of all the vital organs that sustained the functioning of a biological woman, enlarge them and put them on display.

You also use a lot of biological references in your practice. What draws you the sciences in your art practice?

I guess I’m less interested in biology and fascinated in material engineering. I’m really interested in what things are made from, how they are made and their materiality. Those questions can be applied to the self. Who am I? What is my race? What is that made of? I see biology as an extension of my interest in materiality. I have no scientific background. I failed biology and chemistry and physics in high school. But the role of an artist can give you insights into many fields. You know a little bit about everything. You are curious and, in turn, people become curious about what you do. I often find myself collaborating with people that are not artists in the traditional sense, biohackers, for instance.

Art is so pluralistic these days. There’s no need to stick to one medium and, you know, I’d be so bored. 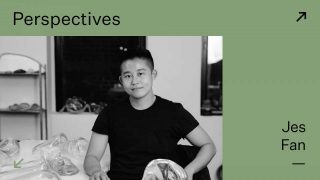 The Adelaide Review is a media partner of Guildhouse