The Art Gallery of South Australia’s newest appointment could not be returning to her home state at a more challenging time.

Tansy Curtin is starting a role at the Art Gallery of South Australia (AGSA) during an unusual time to say the least. Relocating from Bendigo, Victoria, where she held the role of curatorial manager at the Bendigo Art Gallery, Curtin spent 14 days in self-isolation before starting her new role at a workplace that, like so many of our major cultural institutions, is currently closed to the public.

“It is certainly an unusual time to be relocating and starting a new job! Of course the current pandemic does necessitate changes to my position, especially since the physical spaces of the gallery are currently closed,” says Curtin. “It is still crucial to support our local, national and international art communities and to afford people the opportunity to connect and engage with the arts on a broad level through increased virtual offerings.”

Originally from Adelaide, Curtin could not resist the opportunity to take up the role of Curator, International Art pre-1980, at AGSA and return to her hometown. She is a graduate of the Master’s program in art history and curatorship run jointly by AGSA and the University of Adelaide, and, before moving to Bendigo in 2006, she held various positions at Adelaide Central Gallery, Flinders University Museum of Art and the Samstag Museum of Art.

“AGSA has an outstanding reputation within the public gallery sector with a dynamic exhibitions program as well as nationally and internationally significant collections,” says Curtin. “[This] position … presented the perfect opportunity to work with an institution and team I greatly admire.”

During her time at the Bendigo Art Gallery, Curtin played an important role in enhancing their reputation as Australia’s largest and most significant regional gallery. She worked on a number of diverse exhibitions, citing the 2019 Tudors to Windsors: British Royal Portraits as a highlight.

The exhibition, which traced the history of the British monarchy through the collection of the National Portrait Gallery, London, focused primarily on official royal portraiture. To bring these works to life for audiences to engage with, Curtin secured key loans of historic fashion, armour and personal effects to accompany the grand portraits.

These included: a suit of armour from the Royal Armouries (Leeds), thought to have been worn by Edward VI; historic gloves, including the coronation gloves of Elizabeth I and Elizabeth II; and a waistcoat worn by King George III and the christening gown worn by his son George IV from the Royal Ceremonial Dress Collection based at Hampton Court Palace.

“While each of these objects is beautiful and interesting in its own right, when paired with the portraits and placed within the social and historical context, they helped visitors to understand and interpret these long-gone people in history,” explains Curtin.

Curtin hopes the skills she has developed during her time at the Bendigo Art Gallery will put her in good stead to be successful in her new role. She brings extensive knowledge and expertise which she believes will open up opportunities to share international collections with an Australian audience as well as creating greater awareness of the significance of AGSA’s international collection and adding to historical art scholarship.

“I am keen to support and develop the international collection and exhibitions program to maintain relevance for all members of our community. Art history is not a static area of study and, as curators, it is important to continually unpack and recontextualise works of art,” says Curtin. “As a curator of historical art in the 21st century, I want to ensure that we tell numerous stories, not just those of the privileged, and involve our diverse community.”

It’s an unusual time to be taking up this new role, but Curtin is excited to be coming home to work for such a reputable institution . The time to encourage physical interaction with the gallery is still some weeks away, now more than ever the arts play a critical role in the mental health and wellbeing of our community and will continue to do so when the COVID-19 crisis has passed. 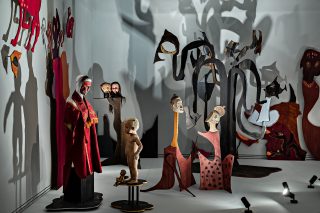