Billie Justice Thomson serves up a taste of kitsch nostalgia

Billie Justice Thomson has a constant list of things she wants to paint, most of which focuses on the kitsch, nostalgia and iconic food imagery. While Thomson’s approach to this exhibition is a bit looser and more carefree than other shows, it still reflects her signature style, which is good news for fans of her work and a great time for new audiences to experience it.

“I really wanted a show where I was cutting myself a bit of slack and actually painting things that I really wanted to without worrying if it was going to sell or not. I wanted to loosen up and have some fun,” Thomson says.

Flavour Memories continues Thomson’s fascination with nostalgia. “Everyone has a different emotional attachment to objects and different times in their life,” she explains. “I really like that I get to paint these things that have meant something to me, or that I love, and that inadvertently become that same thing for someone else.”

Since returning to Adelaide from Melbourne a few years ago, Thomson’s handiwork has become an increasingly common sight around the city, with commissioned pieces appearing everywhere from the front door of Rundle St bar Hellbound to the paper wrapped around sandwiches from Central Market icon Lucia’s. Such commercial work, particularly shopfront window illustrations, has in turn influenced Thomson’s more personal creations.

“I’m painting from the inside essentially of a clear Perspex box, the box being the frame,” she explains of her current process. “It’s starting with a black outline, and then filling in layer by layer, often five or six layers to make it translucent. It’s exactly the same technique as with windows; it’s an old technique that was originally from signwriting, where everything is done backwards, everything’s flipped around and is done layer by layer from the front to the back.

“I used to do it on glass,” she says, “but it was just too risky – my framer suggested I switch to acrylic.”

Thomson cites her depiction of the iconic Cherry Ripe bar as one of her favourite pieces in the series, with it also embodying the essence of the show. She hasn’t held back on her application of red glitter, which is unintentionally reminiscent of Dorothy’s shoes in The Wizard of Oz, only adding to the nostalgia.

When deciding on what to include in the exhibition, Thomson took into consideration her three-year-old son, who she really wanted to see the exhibition, so she created a series of works that had a broad appeal.

“I really thought about having work that would appeal to children. I want children to come to my show and be able to remember it and relate to it. I didn’t want to exclude anyone,” Thomson says.

Ultimately, Flavour Memories is a fun exhibition which celebrates Thomson’s love of painting and obsession with nostalgia. While she continues to paint things she loves, this time, she says, “they are a bit sillier and a bit more accessible to everyone”. 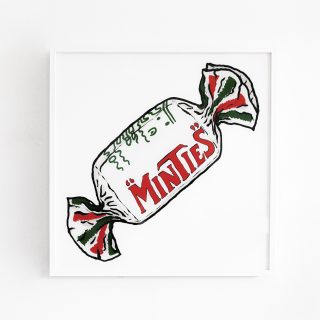