Mary-Jean Richardson goes off the wall

This exhibition of paintings draws on painterly history, but is displayed in a way that allows the viewer and the art to stalk each other.

The artist’s studio, at the high-water mark of 19th century salon painting, was an inner sanctum, visited by the privileged few, complemented by adjunct spaces for viewing and soirees. Today it’s just as likely to be a shed or kitchen in which things get made. But the tradition of the studio as a head space still applies.

Engine room, ideas lab – call it what you like, the studio is not only a place where things get made but where ideas are generated and put to the test. Mary-Jean Richardson has been putting a number of ideas to the test in her studio recently. Those that may have failed are faced to the wall or covered in a shroud. Appropriately, this shrouding is echoed in a painting perched on a nearby easel, of Christ entombed, referencing Giuseppe Sanmartino’s The Veiled Christ (1753) in the Cappella Sansevero, Naples.

In Richardson’s studio, lit by glorious Adelaide southern winter light, the shadows of studios past murmur in the corners. Her ‘shrouded ones’ remain part of the mix. Their time has not yet come, or their capacity to express ideas has stalled. The central agenda of Richardson’s practice is a conversation, through art, with things that could be regarded as incipient, incomplete or impermanent. Painting has been pronounced dead many times but it still embodies a way of engaging with the world. Art ‘vlogger’ James Kalm summarises this contradiction: “Painting is dead. No painting is alive. No it’s dead, no it’s alive, no dead, no alive, dead, alive, yada yada yada.” Richardson adopts the position that painting never needs to defend itself. It generates ideas. That’s all that matters.

In 2013 Richardson undertook an art residency in Rome. Seeing paintings and sculptures within the context of palaces, civic buildings and churches left an indelible impression. Richardson’s subsequent studio practice began to concentrate its gaze on the Baroque. This was not an uncritical celebration of the spirit of the age with its sumptuous interiors symbolising the union between the heavens and earth. Richardson was drawn to the dark side where Christian belief in a heavenly paradise hovers above the abyss of a pagan underworld.

A previous work, As above so below, inspired by a sculpture encountered in Rome, depicted the god Mercury crouched low to the ground as if listening to voices from the underworld. This ‘between two worlds’ symbol resonated with the artist and encouraged her to further explore the idea of death and life as co-existent. Perversely, it might seem, the messengers the artist has chosen for this mission are ‘dead’ sculptures from a vanished age. They make their appearance in this current exhibition – details of Baroque and Classic revival statuary, articulated in the barest of colour palettes and suspended in airless space.

But there is a pulse-beat. It can be found in the close-ups of an ear or a gesture that references the way the living connect with worlds past and present through the senses. It is also there in the materiality of the painted surface. Included within the exhibition are small dark panels lit by highlights that, on closer inspection, are encrusted with textural daubs and gestures. They behave like details of a Caravaggio composition – the gleam of a knife, a jewel, the sheen of armour, teeth bared in ecstasy or terror. The considered mark-making which enlivens the surfaces suggest that in this exhibition Richardson has included a set of business cards to remind herself, and anyone else who cares to know, that the artwork matters above all else.

In her mind it will always be ‘of itself’ – always a little out of reach. Which leads to the main game of this exhibition – the viewing experience. All the works are off the wall. Purpose-built armatures and shelving tilt paintings at various levels and angles. Reflective surfaces pick up on the painted images and syndicate them into different viewing constructions. By such means Richardson explores the possibility that gallery-mediated painting might be experienced as fragments remembered from being in a church or palace somewhere, sometime ago.

On offer in this distinctive project, the first one-person exhibition by Richardson in a while, is an open-ended metaphor for the ambiguous identity of painting in a contemporary art world. Devoid of the usual props, such as start-left-and-look-at-rectangular-things-hanging-on-walls, Ancient & Modern is a cat and mouse game in which the viewer and the art get to stalk each other. The artist has said that painting starts as a monologue and as the work progresses it turns into a conversation. This is a rare opportunity to listen in on the conversation, in the company of ghosts of painterly gestures past and afficionados of dark, tough paintings everywhere. 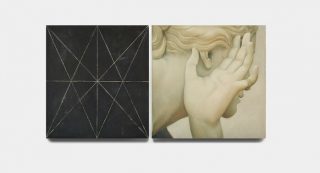