As the noise around COVID-19 took hold in March, it was easy to miss that the Australian Human Rights Commission released its Respect@Work report, the result of a ground-breaking National Inquiry into workplace sexual harassment.

Respect@Work is a weighty document that includes 55 recommendations, the bulk of which call for changes to existing anti-discrimination, employment and work health and safety legislations to simplify a confusing system. In its foreword our Sex Discrimination Commissioner Kate Jenkins pulls no punches, declaring that, “the current legal and regulatory system is simply no longer fit for purpose.”

Abbey Kendall, Director of the Working Women’s Centre SA (WWC) speaks to some of that confusion. “There is a duty for employers to provide a safe workplace, but that doesn’t spell out what that means with regards to sexual harassment,” Kendall tells The Adelaide Review. “So, if the legislation said that you had to have a policy, or you had to have training – that would be a huge step in forcing cultural change”. Likewise, some might be surprised to learn that currently sexual harassment is not considered so serious a workplace offence that it could automatically attract dismissal.

The Commission also recommends that Australian governments provide increased and recurrent funding to existing working women’s centres, and to re-establish them in jurisdictions where they no longer exist – which thanks to decades of cuts is everywhere except South Australian and the Northern Territory. For Kendall and her team recurrent funding would provide much needed stability. “I mean with sexual harassment, you’re not going to eliminate it in a year,” she says. “It really is a long-term project.”

For the unfamiliar, the WWC is a not-for-profit that provides representation and information to vulnerable workers as well as primary prevention training for workplaces and community organisations. South Australia’s small but effective team is, during ordinary times, nestled above Station Arcade off Hindley Street. Kendall took on the Centre’s leadership in early 2019 and she’s proud to lead an organisation that has been “at the forefront of law reform and social change for women for 41 years”. It is exactly this kind of feminist, client-centred approach that the Commission says makes them such a valuable source of holistic assistance for sexual harassment victims.

Kendall is pleased the Commission has recognised the important role these centres play. “We need more outfits like us. We need women’s spaces. We need representatives who understand the dynamics of sexual harassment and are willing to get in there with the workers – but also with the employers – to affect change”.

And the need for change is urgent. Almost two in five women, and one quarter of men, had experienced sexual harassment in the workplace in the last five years, and most people who experience it never report it. Notably, Respect@Work recognises that while the underlying condition for sexual harassment is gender inequality, it is not the only factor that drives it. Other forms of societal discrimination can compound the risk and so, workers who sit at the intersection of multiple forms of disadvantage are more likely to experience it.

One disturbing indication of this is the finding that Aboriginal and Torres Strait Islander people are 21 per cent more likely to have experienced workplace sexual harassment than non-Indigenous people. Kendall said this rings true at the Centre. “Clients with English as their second language are incredibly vulnerable, people of colour, and we know that the sexual harassment and sexual abuse levels in the disabled community are at abhorrent rates”.

As though ensuring safety was not reason enough to stamp out this kind of behaviour, Respect@Work reminds us that the lost productivity caused by sexual harassment also has a significant and tangible impact on our economy, with Deloitte offering a conservative estimate of $3.8 billion.

Workplace sexual harassment is a form of gendered violence that sits within a spectrum, and during the inquiry several victims told the Commission about harassment that began with verbal exchanges and ended in rape or sexual assault. This is an incredibly serious issue and it is a sad reality that during ‘unprecedented times’ reports like these have to compete for our attention.

But as more workplaces reopen these lessons are as important as ever and Respect@Work makes a compelling case to take urgent action. Commissioner Jenkins wants Australia to use this as an opportunity to take on a leadership role in this space, and we should heed her call. In the meantime, South Australians are incredibly fortunate to have a service that so consistently punches above its weight. This financial year alone the Working Women’s Centre SA has recouped over $430,000 in underpayments and compensation won for its clients – imagine what they could do with secure and ongoing funding.

If you are South Australian and need assistance with workplace sexual harassment, or any other workplace issue you can call the Working Women’s Centre SA on (08) 8410 6499 or fill out an inquiry form at wwcsa.org.au

Gemma Beale is a PhD candidate at the Australian Industrial Transformation Institute, Flinders University exploring the relationship between precarious employment and industry closure. 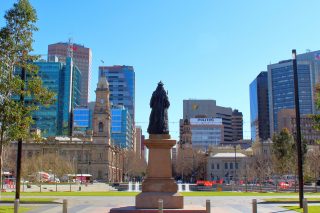 Slings and Arrows:
A city in pandemic mode