Travelling within South Australia is all the Range

Shifting the focus of your 2020 travel plans to more easily accessible destinations like the Flinders Ranges offers a reminder that limitation can be liberating.

Usually watching the sunset means looking west towards a glowing sky. So it feels strange to be facing in the opposite direction, but it’s hard to take my eyes off of the Chace Range.

The weathered sandstone escarpment is painted with stripes of sedimentary rock that are currently emitting a rosy pink glow. And as I watch, the colour deepens until the long line of hills looks like one glowing ember that has captured the sun’s energy and is holding it for this brilliant show.

Above the range, the colour evaporates into bright pink strands of fairy floss cloud set against a slowly darkening sky. It’s a bewitching sight that’s set to disappear soon, and yet some of the other tourists at the lookout have their backs to it. “Which way should I look?” asks one exuberant child, swivelling comically back and forth.

To be fair, it’s a hard question to answer. Turning around, I see a maelstrom of more substantial clouds aflame with the light of a now invisible sun. Toward the horizon, a slowly receding glow limns the dark mass of serrated ridges and the space between earth and sky is layered with a pastel rainbow of pink, orange, yellow and blue. Before the colours have fully disappeared from the sky, the Southern Cross appears overhead to signal the commencement of the next show.

Spectacular as this nightly ritual is, it’s not the main purpose of my visit to Adnyamathanha Yarta. I’m here to tackle some day hikes and shake off the lethargy of lockdown. It’s why I’m staying at Rawnsley Park, a 12,000 hectare property that abuts Wilpena Pound.

There are seven purpose-built walking trails on the working sheep station, the longest of which heads to the top of the imposing bluff that dominates the skyline to the north and marks the boundary of the adjoining Ikara-Flinders Ranges National Park. So in the early morning cool I slowly climb from a dry creek bed through thick stands of lavishly knotted cypress pine that was favoured for fence posts by early settlers. As I ascend, these give way to spindly gums and wispy casuarina bushes that flutter in the breeze. Everywhere the rocky ground is a rich terracotta colour, waiting for the sun to bring it to life.

Picking my way forward, I find the path growing ever steeper and eventually a fold detaches itself from the seemingly impenetrable wall ahead.

Ascending the steep, rocky gully behind this curtain of rust-tinged sandstone is hard going, and even in the shade and early morning cool there’s soon sweat streaking down my back. Fortunately, every break allows me to take in the views behind me.

I soon learn to stop pulling my camera out because it’s impossible to capture the sheer scope of the landscape in a single picture. Striated ridgelines wiggle horizontally out of the frame, a gibbous moon hangs high above in a sky that seems larger than usual. Further down, a broad red plain dotted with gentle hummocks stretches into the distance, its surface criss-crossed by the life-bringing green arteries of dry creek beds.

The views open up even more as I reach the plateau atop the craggy southern rampart of Wilpena Pound, which sits some 930 metres above sea level. It wasn’t always so. Throughout the Flinders Ranges the region’s geology is laid bare, and I spot several rippled rocks showing that this entire landscape once sat at the bottom of the ocean.

In summer that knowledge would be a tease, but the cool winter days are perfect for walking in the Flinders and there are seldom more than a few wisps of cloud crossing the sky. It’s why all three sets of accommodation at Rawnsley Park are busy, even in the middle of the week.

There are campsites and simple cabins, but I’m fortunate enough to be staying in one of the galah-pink straw bale eco-villas. A TV is discreetly hidden in the corner, but the large east facing windows are the undisputed centrepieces of the lounge area. This is a building designed to maximise views, and later I discover that there’s even a retractable window in the bedroom to enjoy the night sky.

Early the next morning, some of the stars are still visible as the rising sun reveals the by now familiar silhouette of the Chace Range. Watching the sun crest the sawtooth peaks, I remember my earlier lesson and quickly rug up before wandering outside. I’m just in time to see the Elder Ranges to the west turned red by the sun’s first rays.

It doesn’t last long; a few minutes at most. This may be an ancient landscape but it’s capable of changing remarkably quickly. And no matter where you are in the Flinders Ranges, you’re never far from a good view.

The Adelaide Review was a guest of Rawsley Park 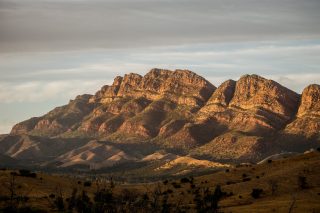 Histories written in the land:
a journey through Adnyamathanha Yarta