“The Plastic House was made very minimally, based around the work I was doing at the time which was working in my parent’s greenhouse,” Chhorn told The Adelaide Review in January.

Grounded in Chhorn’s own family life, and a fear of her parents’ death, The Plastic House is a slow and quiet 45 minutes with minimal dialogue as the filmmaker tends to the family’s deserted property. It’s a solitary ritual Chhorn knows well from holding the fort during her parents’ regular trips back to Cambodia.

“Spending so much time in there, I naturally imagined what it would be like if they had passed away, and I was left alone to continue the work that they had left. I learnt a lot about building the filmic language of The Plastic House and trying to mimic the meditative experience of working in a greenhouse; by using long takes and a sound design made up of natural sounds recorded on location.”

These long, slow static shots were born of necessity as a solo filmmaker, but the work’s style and themes are freshly resonant as we come out of COVID-19 isolation, a period that for many has been a similarly repetitive cycle of daily motions, reflecting on the state of the world and the people we love, even as we are hidden away from them.

“The setting of the greenhouse, which is already situated in the middle of nowhere, puts you in a state of isolation. It seems to be cut off from the rest of the world,” she says. “I also wanted the sound design to put you in a state of isolation. Besides the sparse dialogue, the film mostly comes from location recordings of external forces – like rain, birds, wind hitting plastic, making you feel more immersed in the environment.

“I wanted the film to feel like you were actually being in a greenhouse. I would work a few hours or maybe longer each day. You can easily lose your sense of time in the greenhouse. I also wanted to show the change in seasons and change in growth. So I would film one activity, like the planting in one evening, and then several weeks later film them when they were sprouting.”

Beyond The Plastic House, Chhorn is also working on a new project entitled After Years, which will continue to explore family, identity and memory in the Cambodian diaspora – albeit slightly less alone, this time.

“I’m also interested in the process of everyday rituals, seemingly simple activities that, through time and repetition, can become therapeutic – like cooking and gardening,” she said earlier this year. “So by looking at what people do in their present lives and tracing it back to their history, you can draw a connection between the two – which is something I hope to do in After Years.” 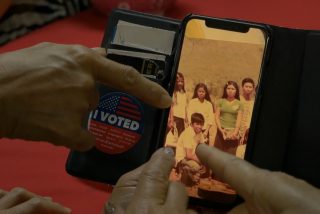