I Am Woman's
Tilda Cobham-Hervey on becoming Helen Reddy

Seven years after making her screen debut in the Adelaide-produced 52 Tuesdays, Tilda Cobham-Hervey finds herself in the “terrifying” box seat of portraying one of Australia’s most successful artists – and a 70s feminist icon – in Helen Reddy biopic I Am Woman.

“When I first found out I got the role I was 22, living in Adelaide, and thinking ‘how am I going to play this international 70s pop star, who ages from 24 to 48 and has two children?’,” Cobham-Hervey tells The Adelaide Review from hotel quarantine in Sydney.

“I didn’t have that confidence seven years ago, but as with all characters you play, you get to step out of yourself for a second and live in someone else’s world. It was quite nice to have a break from being an anxious 23-year-old, to sit in the shoes of this wise 48-year-old.”

We meet Reddy in the late 1960s as a young single mother of dubious migration status, who has just moved to New York to cut a single with an American label. The prize for winning a televised singing contest back in Australia, it never materialises – the first of many commitments made and broken by men over the coming decades.

“It was a really interesting time. Some of it felt so absurd, to be a woman and artist in that time, and one who wanted to have her own voice. But then, some of it felt very familiar,” she reflects, having just returned to Australia after an extended stay in the land of Donald Trump, Harvey Weinstein and ongoing Black Lives Matter protests. “I think that’s what’s so horrifying – we’ve come so far but there’s still a lot further to go.”

The rock biopic is alive and well thanks to box office hits like Bohemian Rhapsody and Rocketman, and I Am Woman certainly has its share of the genre’s favourite tropes – the early-career gigs in sparsely attended clubs, a montage of career highlights, and the mandatory boardroom scenes with comically out of touch record executives who just don’t get it, man.

But being a comparatively rare example of a music biopic about a woman sets I Am Woman apart in telling ways. Usually, we watch our scrappy heroes leave their wives and girlfriends at home as they hit the road, record the hits and fill the stadiums. Here, it’s Reddy who spends the film’s opening stretch marooned in domesticity, sidelined by a husband-slash-manager more interested in his own career (Evan Peters portraying ‘husband #2’ Jeff Wald). By the time we’re shown Reddy writing and performing her breakthrough hit I Am Woman, we know precisely what she means when she sings, ‘yes I am wise, but it’s wisdom born of pain’.

“Helen was a real trailblazer in that respect,” she says of the 1971 anthem which serves as the film’s north star. “She was asked to create this album and was looking for songs to sing on it, and there were just none that represented her experience as a woman. So she sort of went, ‘well, I’ll have to go and write one’. She tucked her daughter in, then was lying in bed when the words ‘I am strong, I am invincible, I am woman’ started going through her head. That became her song.”

While the protests and demonstrations of the women’s liberation movement are largely shown from afar via the influence of her friend and influential Australian music journalist Lillian Roxon (Danielle Macdonald), Reddy writing I Am Woman during one of those quiet moments of solitude when the kids are in bed echoes the millions of small acts of self-emancipation that were occurring in suburban homes around America and Australia during the period.

“She’s such a storyteller when she sings, and every time, in different times in her life, it meant really different things to her. It grew with her, that song.”

“She struggled so much, and she fought so hard – I found her determination so incredible. And even when she’d ‘made it’, she got so much push-back for speaking out about what she believed in, for not looking the right way or saying the right things. She got called the ‘queen of housewife rock’ – but she actually wore that with pride.”

Of course, the untrustworthy manager who snorts or embezzles their way through their star’s earnings (another staple of the rock biopic!) hits deeper when a mid-career Reddy discovers Wald has spent and mortgaged everything they built together. Like many women navigating divorce in the middle of their lives, the gendered division of labour in their marriage – and show business partnership – leaves Reddy financially and creatively disempowered once again. But there’s still that song.

“One thing I found really lovely about working on this film and watching all of her material was watching her interviews as she aged, and how she sung that song I Am Woman at different points in her life,” Cobham-Hervey says. “She’s such a storyteller when she sings, and every time, in different times in her life, it meant really different things to her. It grew with her, that song.”

Lovin’ arms across the land

From the trailer to its final scene I Am Woman seeks to underscore the relevance of Reddy’s story to contemporary feminism and activism, which does pose some challenges in 2020. The second wave feminism that Reddy was responding to, and its heroes like Germaine Greer, are now occasionally out of step with their more intersectional successors, particularly on issues of race and trans rights. In this respect, there are a few small, fleeting moments (like when critics of the Equal Rights Amendment warn of a slippery slope to “homosexual marriage” and “unisex bathrooms”) in which I Am Woman quietly stakes its position, and its take on Reddy’s legacy, firmly on the side of inclusivity.

“It’s also just the truth – we didn’t have to do a lot,” explains Cobham-Hervey, whose breakthrough 52 Tuesdays remains a groundbreaking moment for trans narratives in Australian cinema.

“Helen always really spoke to people who felt ‘other’ or weren’t represented because she was very much about bringing people together,” she says. “And coming up against these systems that separate and divide people, to work to make things more inclusive.”

Australian premiere screenings of I Am Woman will occur at cinemas around Adelaide from 22 – 23 August, presented by Adelaide Film Festival. I Am Woman begins streaming nationally on Stan from 28 August. 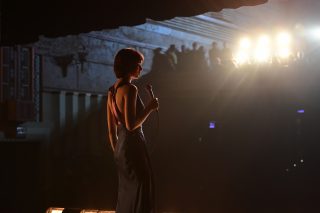 Film Review:
I Am Woman Tilda Cobham-Hervey and Geoff Cobham: The Family Behind the Vale