They were the great Adelaide hope of the 1990s indie-rock explosion, and their music is still adored to this day – so why weren’t they huge?

In the early 90s music scene there was no doubt in everyone’s mind which band was going to be the next big thing to break through from Adelaide. While the rest of the city seemed stuck between folk-rock earnestness, surf thrash aggression or jazz-funk unlistenability, the Mandelbrot Set seemed like something ripped from the pages of the NME.

Their infrequent gigs were events, with the five of them standing nearly motionless on stage, never saying a word, surrounded by dry ice and varilites while their jangling, effect-heavy guitars bounced off the walls of venues like Le Rox and the Tivoli. Had songs like Landslide, Love in Despair or More Than Happy come out of Manchester or Chapel Hill instead of Adelaide they’d be staples on indie pop compilations to this day.

They were the coolest thing the city had ever seen and inspired an explosion of Adelaide indie guitar bands. So when they were included on the third Youngblood compilation by Sydney label rooArt (who had already had hits with the Hummingbirds and Ratcat, and were about to ink a deal with a Sydney trio named You Am I) stardom seemed assured.

The much-delayed A Place Called Kansas EP eventually surfaced in 1992, and the following year’s self-titled EP showed a stronger electronic influence, but the elevation to the next league never happened and the band split quietly in 1994.

And normally that’d be the end of it – band should’ve been huge, wasn’t – but love for the Mandelbrot Set has only grown in their absence. Their effect-heavy guitar shoegaze/dreampop sound is back in style, and copies of their EPs change hands for over $100 apiece on collectors’ sites. The group are also the subject of dozens of breathless posts on Sound As Ever, the 90s music obsessive Facebook group created by Triple J and Recovery star, Jane Gazzo.

There’s also that tantalising element of mystery about the Next Big Things which Never Quite Were, the intrigue compounded by their relative lack of activity since.

Frontman Tim Mortimer was briefly involved in Truck Train Tractor and The American Public before seemingly vanishing off the face of the earth. Guitarist Brian Pyper quit music altogether, as did bassist Adam McBeath until eventually joining Swimsuit. Guitarist/violinist Christie Scardigno had long since jumped ship, heading to new adventures overseas – and demon-haunted drummer Michael Bajer brought his astonishing talents to Fiona Beverage before his tragic, too-early death in 1999.

So what happened, and when did things go wrong?

“The moment we signed with rooArt,” says McBeath, bluntly.

“We were all just so young,” sighs Christie Edwards, nee Scardigno. “I mean, I was 17 and the boys were only a couple of years older. I had my 18th birthday on stage!”

High school friends Pyper and Mortimer were introduced to McBeath through a mutual friend, but it wasn’t until Bajer joined in 1990 that things really gelled. Edwards came on board later that year, and the band immediately became staples on community radio with their early demos. One of those caught the ear of rooArt, who summoned them to Sydney to record Dream So Hard for Youngblood 3 and commit them to two records. And that, it turned out, was the high watermark.

First to go wrong was the departure of the man who signed them, Craig Kamber, to concentrate on managing Underground Lovers. The lack of a champion at the label, plus inadequate management, and – by the band’s own admission – Tim’s habit of rubbing music biz folks the wrong way made them less than popular at rooArt.

“We were wise guys, definitely,” says Mortimer. “I remember seeing clocks on the wall with Sydney-London-New York-Tokyo on it, and just turned to Christie and went ‘W-A-N-K’.”

“He didn’t help the situation,” Pyper laughs. “We didn’t do ourselves any favours.”

“Touring was one big struggle I always had with the label,” Mortimer explains. “I’d say ‘how many bands have had number one albums in Australia and never ever toured this country – and you’re saying I can’t have a career unless I jump in a van and drive up and down the east coast for the next five years?’ It doesn’t make sense to me.”

Pyper had a very different opinion. “I don’t think the guys wanted to tour, but I was always like ‘let’s buy a van and go!’ because we were too young to hire vans then.”

But luck was against them. McBeath even relates a heartbreaking what-might-have-been moment, when the band were at the rooArt office at the same time as a visiting Ivo Watts-Russell, founder of UK label 4AD – home of the Pixies, Cocteau Twins, Lush and other atmospheric indie-guitar superstars – but were forbidden from approaching him. “He was 20 metres away from us, and they wouldn’t let us talk to him,” he fumes. “They were playing him videos by Cleopatra Wong, or something.”

The more New Order-style approach of the second EP also caused problems. Released at the height of Australia’s rock renaissance it was completely out of step with Australia’s musical vogue, while internally the move away from guitars toward synths and programmed beats sidelined Pyper and Bajer. “Tim and Adam really knew what they wanted to sound like, and Tim was saying ‘OK, we’re not going to have any more guitars,’” Pyper says, “and we were like ‘OK, so what are we here for?’”

Crucially, it also meant that the band struggled to play live with clunky and temperamental equipment – including Mortimer’s ancient Atari which provided the backbone of the new songs. Relations within the band soured, and Bajer’s substance use started to affect his performance.

“I was so disappointed,” Pyper sighs. “I thought ‘Jesus, we still have lots of great songs.’ But we just couldn’t get past that stage.”

Mortimer fell out of love with guitar music for the most part, living a nomadic global lifestyle before returning to Adelaide a few years ago. He still plays music but the palate has changed somewhat. “I have taken up the shakuhachi,” he laughs. “And Mike and I used to joke about it because there was a shakuhachi patch on our sampler. I just wish I had the opportunity to go around and say ‘hey Mike – guess what?’”

When talking about Bajer all the members talk about his enormous talent, and how baffled he was at their first rehearsal when the rest of the band burst out laughing “because suddenly we just sounded amazing”. The end of his and Edwards’ relationship prompted her departure from the band and new horizons overseas, but she speaks of those times with unfiltered joy.

“Everything was its own mini-adventure, a gig or recording or an interview or a photoshoot, or even just going into town,” she says. “It was just cool to be together. It was a happy time.”

Mortimer sums it up neatly. “And we were a good band. We showed a lot Adelaide bands that you could mean something to people.” Greasy Pop memories:
Revisiting An Oasis In A Desert Of Noise 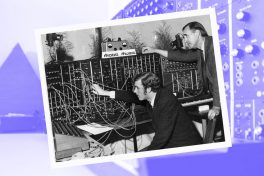 Tom West brings it all back home: 'It was honestly a bit cosmic how things played out'