Plucked from community theatre to play the leading role of Maria in Opera Australia’s international tour of West Side Story, Sophie Salvesani is leading the charge in this youthful revival that pays homage to a classic.

In 2008, when she was just 15, Sophie Salvesani was cast in a community theatre production of West Side Story. She won the role of Consuelo, a tough young Puerto Rican girl with bleach blonde hair and lots of baubles, and was also given the leading role of Maria to understudy. So it came as no surprise to anyone – except maybe Salvesani herself – that when Opera Australia posted an audition notice looking for a fresh, young cast for its upcoming international tour of West Side Story, it was Salvesani who landed the coveted role of Maria, a modern-day Juliet who falls in love amid two feuding families.

“It’s a little bit strange but also amazing that it was my first musical, and then for it to be my first professional musical feels like I’ve really come full circle,” says Salvesani, 25, who saw the audition notice online while travelling home to Queensland from Sydney, where she’d been honing her voice for the past year in Pacific Opera’s Young Artist Program. “I actually still had two more months with Pacific Opera but, in this industry, honestly, you’re always thinking about what to do next.”

She sent an application in and did not expect to hear back. After all, she was 24 and had never performed professionally before. But five weeks after sending in the initial submission and three callbacks later, she received an email heavy with congratulations. “Usually it’s a phone call, so I was a bit surprised,” says Salvesani. “I was madly scrolling through thinking that I’d missed something, that surely the email was telling me that I’d been cast as the understudy.”

It’s a huge leap to go from community theatre to performing in the Berlin Opera House, and some have been critical of Salvesani’s rapid rise. “Some people have said that I haven’t paid my dues by being in the ensemble, but I don’t think I’ll look back and wish that I’d taken a different path,” she says. The rebuttal to that, of course, is that West Side Story is about lovestruck teenagers – Maria is barely 16 years old when the story starts – and only young people can portray the characters with the requisite amount of blinding optimism.

Director Joey McKneely has been touring versions of the now 60-year-old show for 20 years, each time adding something fresh. This incarnation is as traditional as West Side Story gets, with a chocolate-box set, lavish costumes and a storyline that doesn’t stray from the timeless masterpiece that debuted on Broadway back in 1957. What does set this revival apart from previous McKneely productions is the cast list: not only is it the youngest he’s ever toured – some are still teenagers – but it also features a diverse spread of ethnicities (a serious criticism of past shows was a lack of diversity).

It’s the young cast, Salvesani believes, that really forces the audience to feel the impact of the show’s tragic storyline. “[McKneely] wanted to make the show as accurate as possible,” she says. “I think audiences often forget that the gangs are teenagers. They’re meant to be, you know, 16 to 19 years of age. And I feel like watching young people play those roles has more of an emotional impact, especially towards the end when the audience sees these young gang members experiencing such tragedy.”

This revival also has a real timeless quality, which helps to highlight the contemporary relevance of the show’s themes. “I think the show is more relevant now than it was back when it just came out, and that’s what keeps bringing the audiences back,” she says. “You just have to turn on the news in the morning and there’s conflict over something, whether it’s racial groups, religious groups, other political views. There is always going to be two sides, that don’t get along over something.” Interestingly, she says she observes many audience members coming back to see the show again and again, hope that this time there’s a different ending. “I think the audience just gets so wrapped up with the love story that they forget that the show actually ends very tragically,” she says. “It’s like they hope so much that their brain tricks them into thinking that it ends differently than it does.”

The Adelaide performances – which kick off on 28 November and run until 8 December – will mark the end of the show’s seven-month tour, which started in Melbourne in April, travelled to Wellington, the Berlin Opera House, the Sydney Opera House, Canberra and now SA. “Singing in a German opera house was my ultimate goal and to be able to do that while I was 24 was just unbelievable,” says Salvesani. “I guess I need to think of a new goal now.” 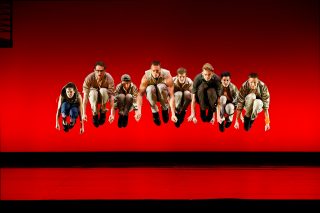