Translated from screen to stage with music by Elton John, this musical version of Billy Elliot is, at its best, a celebration of dance.

Set in northern England in 1984, this play is about Billy, who just loves to dance.  His father, a miner on strike, doesn’t think much of it, and orders his son to give up ballet.  The show takes a while to get going, and Billy’s story at times becomes secondary to his dad’s.  But there’s plenty to enjoy in this celebration of dance. For a start, Billie’s grannie has a solo, and an amusing one at that, about never being sober. Half a dozen young ballet girls have a class, and are often on stage.  And being a musical, there’s a good deal of singing, especially by the chorus of miners – and good singing it is, though Elton John’s music itself is not very distinguished.

The highlight of the first part of the work is a dream sequence with an older Billy dancing with his younger self – this is beautiful, excitingly choreographed and cleverly staged, with clouds at the dancers’ feet and a high wire taking Billy into the air.

Four teenagers take the part of Billy on different nights – Omar Abiad, River Mardesic, Jamie Rogers and Wade Neilsen.  I saw Neilsen, and was mightily impressed by his control, elevation and stage presence in general.  It’s a big role, the actor seldom being off stage.  As well, he has to show the character developing from boyhood through adolescence into young manhood.

The dancing is one arm of the piece, the other is the story of the miners’ strike Billy’s dad is part of. At times I felt there was too much about the strike, at the expense of Billy’s story – but generally the two stories  progress together and the relationship, which had begun shakily, culminates with the father, after a conversation with the boy’s dancing teacher, Mrs Wilkinson, strongly played by Lisa Sontag. He even becomes proud of Billy’s being accepted into the Royal Ballet School at Covent Garden.  Justin Smith, who played Billy’s brother in the original Australian production in 2007, now does a good job as his father.

This is a powerful play, particularly in showing the hostility between the striking miners and the police, but the seriousness is modified by the dance and music. 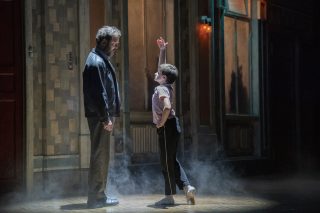 No Strings Attached celebrates 25 years of breaking the fifth wall