Frankenstein: How to Make a Monster emerged as the heroic dark-horse of the 2019 Edinburgh Fringe Festival; collecting the OffWestEnd TBC Award for ‘Shows that Defy Categorisation

“Once every few years a show comes along in Edinburgh that is THE unmissable show of the festival. ‘Have you seen X yet?’ becomes the question everyone asks, and last year X equalled Frankenstein,” says RCC artistic director David Sefton.

“We were incredibly lucky to land it – everyone was after it!”

This award speaks volumes of the BAC Beatbox Academy’s ability to seamlessly traverse themes and genres, whilst still paying homage to the original text. The piece is an experiment in re-animation, with six young musicians masterfully breathing life back into Mary Shelley’s 202-year-old story with beatbox and a thundering soundtrack.

Despite production’s intricate technicality, part of what makes this contemporary remix an essential in your 2020 Adelaide Fringe schedule is the modernisation of Shelley’s tragic monster.

Dancing with the same danger that multiple retellings of Shakespeare face at the Fringe, there is the ever-present risk for the show to feel trite. However, this mash up of gig theatre and rap rhapsody embodies the urgency and intelligence of the familiar Frankenstein story.

Each topic is unpacked with a ferocious amount of energy and emotion that asks the audience to consider the monsters that lie within each and every one of us.

Using Shelley’s framework as a hook, the production raises new existential questions about how we can develop a solid sense of self in a world saturated by social media and its corresponding pressures.

As synonymous as Frankenstein is with darkness and horror, this reinterpretation still brings a joyful energy to the work despite its heady contemporary themes. The personalities and talent of the six performers — whose aliases are Aminita, Native the Cr8ive, Wiz-rd, Glitch, Grove and ABH — is accented by the atmospheric staging of the performance; darkness is punctured by a scattering of pendant bulbs that allow the performers shadows to dance around the venue and incites joy and wonder.

“The glorious thing about this show is the genuine originality of the experience,” Sefton says.“There are moments you completely forget that this is a show where literally everything comes out of the mouths of the cast on stage – and when you remember you find yourself asking “How on earth are they doing that?”!”

There are certainly times where the audience might forget they’re watching a resurrected piece of the 19th century storytelling, as the space throbs with complex harmonies and a riot of rhythm that invites the question: could this really be just six people and their microphones?

The complex art of beatbox theatre is rarely celebrated in the capital A arts world, and the show’s ability to connect to so vividly to audiences is testament to the uniqueness of this show.

With a wide appeal that skews across hip hop fans, horror junkies and anyone looking for a unique night out at the Fringe, Frankenstein: How to Make a Monster really is a show for everyone.

“It’s true – the over-used and generally inaccurate cliché really does apply in this case,” Sefton says. “When I saw the show in Edinburgh there were teenagers dancing and pensioners smiling and literally everyone had a blast!” 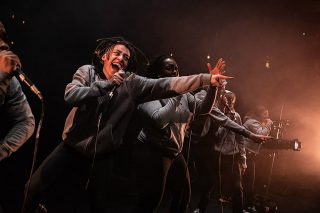 Frankenstein: How To Make A Monster