Hannah Gadsby follows the watershed success of Nanette with a new Netflix special that pairs her now-signature meta-comedy with a meditation on how it feels to sit outside the tent of white, male, neurotypical privilege.

Hannah Gadsby begins Douglas by explaining that this new stand-up performance-turned-Netflix special does not rely on the audience having watched its predecessor, the spectacularly successful game-changer Nanette. “I’m not that kind of confident,” she jokes, while betraying an awareness that Nanette has garnered her a reputation. Don’t fear, she tells the audience, “I’m fresh out [of trauma]”.

So how then does Gadsby’s “difficult second album” (albeit one she notes is “also [her] tenth”) build upon a performance in which she explicitly told us that she was quitting comedy? She responds by turning the mirror away from herself, and the self-deprecating humour so emotionally deconstructed in Nanette, shining it back on to others in a work of meta-comedy that even further strips back the form.

In the first 15 minutes of Douglas, Gadsby takes time to outline exactly what the audience should suspect from the hour of the so-called ‘real’ show to follow. There are observations about Americans (where she is now based, thanks to Nanette’s success), anecdotes from the dog park, and joke sections that are sandwiched around her reveal that she is autistic. This scripted, drawn-out trick deliberately gives off a bad first impression, Gadsby admits, because often so do people with autism. “So this is a show that rewards people who persevere,” she says, “who go beyond their discomfort, just to see what’s on the other side of the spectrum.” Based on Gadsby’s example, the ‘other side’ sure involves a lot of puns.

At its heart, this is a show about ‘othering’. Many will see much of the material as cheap barbs against the privilege of straight white men. What Gadsby is attempting to build, however –just as she did in Nanette –is an understanding of why those who sit outside that demographic are suffering. How it is that she wasn’t diagnosed as autistic until the age of 37? How are male doctors still mistreating menstrual health? How can she not even go to the dog park without being told (by a man) to smile?

Though an important omission from Douglas is examination of Gadsby’s own privilege, she is acutely aware of who is listening, joking that her ‘core demographic is rich, white, entitled women’. Gadsby references the comedic principle of ‘punching up’ several times, and is clear to remain in these boundaries.

Where Douglas succeeds most is the combination of the Gadsby of LA with the Gadsby of Oz, harking back to the kind of material that saw her win a niche but loyal following before Nanette exploded. Her knowledge of and ability to harness art history as a basis for visual cues and jokes turns our gaze away from Gadsby on stage to a peppering of jokes based on the content shown on a screen that tops it, without steering away from the themes of the show. 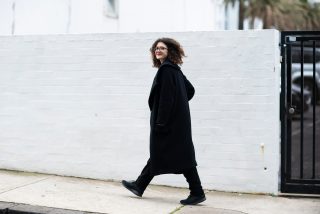