As the world’s second biggest Fringe festival, Adelaide Fringe is a core component of one very unique incubator for new productions. Here are some of the shows that have been making an impression at the core Fringe events of Adelaide and Edinburgh over the last year.

The core fringe circuit consists of Edinburgh and the world’s second-largest, in Adelaide. For many Australian and international shows and performers, the two festivals represent one highly effective and efficient creative incubator.

Adelaide’s unique role within this incubator explains a lot about why Australian performers are so prevalent in Edinburgh. What emerges from this combined incubator must count among Australia’s most-significant ongoing contributions to the international arts community.

Here are some of the shows that have been winning plaudits on this unique circuit.

Envisioned as a circus take on a 1920s jazz club, Rouge was devised with the the fading-postcard glamour of the original Spiegeltent in mind, and it shows. With modern overlays, the show would pleasantly impress the likes of a Marlene Dietrich, who once played such venues.

Dubbed ‘circus for grown ups’, Rouge invites you into an adult fantasy with a liberating approach to sexuality. In execution, Rouge is gorgeously subversive.

With classical mime and clowning, three-piece troupe The Latebloomers remind audiences of the joys and freedom that arise when we surrender to pure child-like whimsy.

So, what’s Scotland about? Ostensibly it’s a homage to all things Scottish, but their true allegiances lie with good old English absurdism. In that well-trodden field it can be difficult to cast one’s own shadow outside the monumental shade of Monty Python, but this trio give it a tartan-red hot go.

Virginia-based performer Carmel Clavin inhabits the role of the titular Maiden, who we find slumped asleep in her fin de siècle finery, as she moves unknowingly forward to a new and foreboding century.

As Carmel tells it, once upon a time in the late nineteenth century there was a fully human, “penny-for-a-song” street singer. One tragic day, a famous man recorded her voice. As he did, he stole it, disabling her humanity and condemning her forever to the half-life of an automaton.

Through a limited range of mechanistic actions, Carmel’s Maiden strives to reach beyond her bounded existence. With haunting, melancholic songs and an air of infinite sadness, she sings of misplaced expectations, hoped-for connections and abandoned loves.

Railed is an all-male, western-themed circus. It places four highly physical, and uniquely hopeless, bandits alone in a very wild west. With time to kill, they cook up all sorts of boys’-own tom-foolery. But, like landing on a horse backward, they never seem to get going.

Pushed along by a Morricone-esque mash-up beat, Railed brings more than a mere ‘bromance’. Gone are the seedy double-entendres and glitterised-campy devices of an earlier era of queer-friendly storytelling, but nor is there the guilt of the wind-swept high planes of a Brokeback Mountain. In Railed, there is no need for such subterfuge – it’s all out there.

The HandleBards are a troupe of pedalling troubadours who proudly plonk Shakespeare back into the pit of the cabbage throwers. And, in a 21st century homage to the 16th, this all-women troupe brings a contemporary twist to that peculiarity of Elizabethan theatre: the single-sex cast.

Costumes and props are restricted to what the troupe can carry as they cycle between gigs, but despite these limited resources they inventively repurpose the props at hand to create one big Blytonesqe adventure.

In Shakespeare’s telling, The Tempest is a tall-tale of wizardry and natural disorders – a comic face-off between good sorcery and wicked witchery. There is no shortage of Bard-inspired shows doing the Fringe rounds, but The Handlebards’ knack for conjuring a Shakespearean world out of virtually nothing is a special kind of magic. 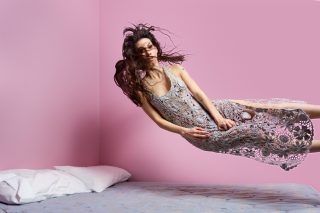 Fringe Hacks:
How to find cheap Fringe tickets around Adelaide