In Gobby, Bri is trying to make sense of the people around her. Specifically she’s trying to understand why it is that her friends don’t seem to like her very much. They weren’t there when she needed them: don’t they at least owe it to her to invite her to the pub?

Jodie Irvine’s one-woman play is told through five parties, each marking a significant milestone as Bri deals with the aftermath of an emotionally abusive relationship. There is awkward flirting, binge drinking, D&M’s in the kitchen and dorky dancing.

Irvine brings great energy to this performance. There is a definite nod to Fleabag in its original form as a one-woman play as Irvine brings both sides of cringe-worthy and heartfelt conversations alike to life. Particular characters as marked by accent changes that don’t always follow through to the end of the scene; greater movement and expression would take away the need for some of this work and maintain consistency throughout the performance.

The use of minimal props to their full effect is clever and charming. The childlike manner of Irvine playing with Kmart’s party supply section adds colour without detracting from her connection with the audience.

Sadly though there are distractions beyond the stage that are difficult to push through at times: music playing from other tents close by, props hung and stacked visibly side of stage, and the stage curtain that never quite closes showing a glimpse of the mess behind the scenes.

The greatest success of Gobby is the text itself. Irvine has written a gorgeous work that is perfectly crafted for a festival hour. Each act is distinct but gently brings together the central narrative of self-acceptance. There is a real poignancy on show here without ever becoming overwhelming for survivors or abrasive for the unsuspecting.

At the conclusion of the performance an audience member is heard saying ‘I just want to stay and help her clean up!’ In many ways this captures the spirit of the room: the audience have drawn close to Bri as cups have been tipped over and streamers unraveled. She now knows which mess is her responsibility to clean and what to leave for others to mull over. The next party doesn’t seem far away. 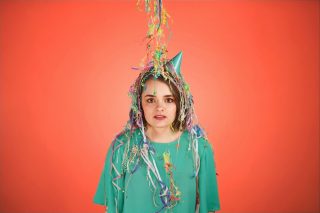