Grand Designs presenter and architect Kevin McCloud’s World According To Kevin speaking tour will take in a series of Australian dates next year.

Architect turned television host McCloud’s mix of design insight and brow-furrowed concern at the equally preposterous and inspired ways affluent Brits spend their money has helped make Grand Designs a global sensation and ABC television staple with numerous local spinoffs around the world. But, aside from perhaps its Kiwi cousin, none has quite matched the heights of the McCloud-led original.

While McCloud has recently attracted negative press for the financial woes of his environmentally-friendly housing development company Happiness Architecture Beauty, his upcoming World According To Kevin Australian tour promises a night of conversation and discussion around architecture, sustainability and his work on the show. With McCloud already lending his support to the unsuccessful local campaign to save Port Adelaide’s Shed 26 earlier this year, it will be interesting to see what perspectives he might bring to South Australia’s current wave of planning reforms.

Of course, it remains to be seen how a stage show can possibly convey the ultimate Kevin McCloud experience all Grand Design viewers secretly yearn for: to have McCloud shake his head with disbelief as he walks through your half-finished, behind-schedule dream build while you explain how you’ve left your day job to take over project management yourself. That always ends well. Kevin McCloud:
‘It’s important to have architecture that doesn’t shout‘ 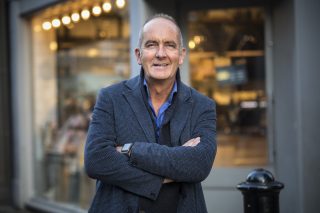 The World According to Kevin McCloud