Art historian Alice Procter examines the knotty colonial roots that underpin our museums and galleries, and how we can seek out perspectives that are often buried or ignored.

History is catching up to museums and galleries around the world, from the ‘Elgin Marbles’ to repatriation processes facing our own local institutions. Building on her ‘Uncomfortable Art’ tours in the UK, Australian art historian Alice Procter prods this beehive with a brisk, colourful map of how these places and collections are deeply entwined with the legacies of colonialism, wealth and power that built them. And, how contemporary artists, curators and visitors are reckoning with those inheritances – or resisting.

This isn’t about smugly pointing out the flaws of the past from a cosy modern vantage point. For a start, Procter shows how many of the modern museum’s forebears – like the 18th century British diplomats who used their positions to systematically rob and export the antiquities of Greece for personal gain – often operated with opaque morality even for their own time.

But by walking us through the origins of an eclectic and insightful mix of artworks and pieces – from portraits of Mai, the young Pasifika man brought back to Britain after meeting Captain Cook and Joseph Banks, to the Gweagal Shield contentiously held by the British Museum – Procter shows that museums often hold much deeper and more complex histories than the ones laid out in the official panels.

One affecting example is a small argillite carving made by an unnamed Haida artist in mid-19th century British Columbia, depicting a moment of violence against an Indigenous woman. As Procter teases out a series of sobering insights from this small object, she notes that in the British Museum it sits on a low, poorly lit shelf with little information. Such incuriosity for the deeper stories and perspectives of the Indigenous, the enslaved, the colonised, Procter explains, reflects those deeper structural flaws that prevent many museums proactively owning up to their past.

This, Procter says, is why it’s all the more important for visitors and the public to seek out those stories and ask questions – especially uncomfortable ones. 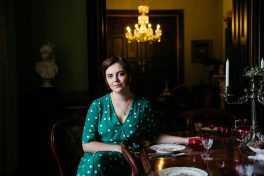 Uncomfortable truths: Alice Procter and the art of decolonisation