German composer Nils Frahm makes an artform out of living in the moment in his long-awaited return to Adelaide.

Nils Frahm bobs onto the Dunstan Playhouse stage just seconds after the house lights go down. A late addition to his 2019 Australian tour, Frahm is evidently keen to make the most of every moment onstage on this, the second-to-last night of a two-year-long stint on the road.

Bathed in warm, golden stage lighting in a little brown flat cap, Frahm has all the appearances of an old-timey craftsman in his workshop as he sits huddled over a wooden harmonium and toy piano. Two simple pieces in a dazzling array of analogue equipment and keyboards artfully piled around the stage, Frahm begins to coax out a series of long, wheezing notes that draw attention to every creaking seat and summer cold sneeze in the room.

Gradually he dials things up, shifting his right arm over to the keyboard by his side, then stretches his left hand to another further out of reach. As the notes of that piece fade out, he shuffles over to the other, bigger mountain of gear and begins to tease out a denser, more insistent composition.

Some knobs are turned, keys pressed, an arpeggiator triggered, and a trailing ellipsis of static crunches are shaped into a syncopated beat. It flutters erratically, like a moth that’s found its way into a light fitting and is insistently, ecstatically pounding itself into oblivion. Frahm just as persistent, embellishing the loop with splashes of sound from a Roland synthesiser close to hand, and evoking, just for a moment, some dreamy mix of Vangelis and Kraftwerk.

With so many toys onstage, it’s a feat in itself that Frahm is able to keep track of it all, a challenge he briefly jokes about early in the set as he goes about adjusting dozens of buttons and dials ahead of the next song. Each night he does his best to press them all correctly, he explains, but sometimes has a little too much fun talking the audience through the process and accidentally leaves something out. On nights where he takes more care, he says, it ends up a little boring. It’s clear that while Frahm appreciates being in control, if it’s a choice between boredom and chaos he would probably pick the latter.

Things return to more minimalist terrain on the austere My Friend The Forest, which sees him sit behind a small electric piano and perform a quietly moving piece set around a recurring, jazz-inflected motif. The value of simplicity surfaces again late in the set when Frahm prefaces fan favourite Says with a joke about its basic composition. It’s far and above his most popular track, he says, but among the easiest to play – he simply turns on an arpeggiator and lets the three notes swim away. He’s tried to write better pieces, of course, but ultimately doesn’t mind the mid-concert breather it affords him.

Frahm closes out the set with an ‘encore’, that sees him take to the exposed strings of a grand piano with fluffy mallets, the rhythms echoing out via a slippery delay effect. He soon hops behind the keys, and what follows more than compensates for the apparent stroll in the park that was Says.

Frahm’s hands are a blur as he pounds out a bigger and more intense wall of noise than all his equipment combined, leaving us with a simple truth: all the tools in the world are only as good as the artist using them. And this one’s certainly mastered his craft. 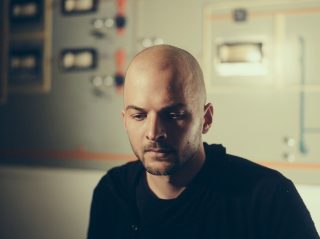