There’s an irrepressible joy to be found whenever Adrian Eagle’s soulful tenor beams from the radio. But that positivity has been hard-fought, as the Adelaide-born singer made his way from cream brick Housing Trust flats to the airwaves.

“When I was 17 I was in an Adelaide Housing Trust [flat] with my mum,” Eagle tells The Adelaide Review. “I’d dropped out of school, and was in a really bad, dark place mentally. My life started to turn around shortly after that; I’d reached the bottom of the ocean in my mind, and I had to touch the bottom, feel it and then start making it back to the surface slowly but surely.”

It’s a trajectory that Eagle – born Adrian Naidu – touched on in his breakthrough single 17 Again, a track that set the tone for much of his work since: head-bopping soul jams marked by sincerity, kindness and humility.

His love of music and songwriting began even earlier, as a 90s kid obsessed with Michael Jackson – an influence that can be readily heard in the occasional ‘ooh’ vocal inflections that pepper Eagle’s verses. As he got older, the Jackson fandom made room for hip hop acts like the Notorious B.I.G., Hilltop Hoods and Jay Z, and later, soul artists like Marvin Gaye and Curtis Mayfield. But it still took several more years before he felt confident enough to share his own music with others.

“I fell out of writing for a long time,” he says. “Then when I was 24, I was staring away [into the distance] at home, and I just knew, this overwhelming force was like, ‘this is what we really need to do’. Sing it out. Life is short. I started writing songs again – I wrote 17 Again and A.O.K. probably in that first month back writing. They were from the original group of songs that I had written.”

Having moved to Melbourne in his early 20s (he’s shifted back and forth numerous times since), Eagle found a group of collaborators who have helped shape those stripped back acoustic songs into the richly produced tracks heard on Eagle’s debut EP, Mama. That sound has seen Eagle score an ARIA nomination, a handful of South Australian Music Awards and, as of this weekend, a spot in Triple J’s Hottest 100 countdown.

Despite being the setting for the toughest years of his life, Eagle has nothing but love for his hometown. “I love Adelaide. Even someone like myself who was locked in my bedroom for a lot of my teenage years, I still felt part of the Adelaide community. I barrack for the 36ers, barrack for the crows, and it’s always going to be home for me, and I always support anything that comes out of Adelaide. It’s in me.”

The Adelaide community has in turn been good to Eagle, with a guest appearance on the Hilltop Hoods’ 2018 hit Clark Griswold helping build his national profile. Such a call-up can be game-changing for an emerging artist, but one of Eagle’s earliest brushes with the trio also offered a lesson in staying true to your roots.

“Sometimes you just know when someone’s from Adelaide. I remember when I first met Hilltops, when I first met Baz [DJ Debris] I remember going into his house, this huge property, and pulling up to record something and being so nervous. But then as I’m in the studio, I see on the ground he had a bottle of Woodroofe Sno Top. And my nerves were completely gone. I was like, ‘you know what, they’re still from Adelaide’. Only Adelaideans know about Sno Top!”

Soft drink choices aside, Eagle is thoughtful and gracious when talking about his past and what lies ahead, and is touched by the ways his work has resonated with listeners who, like his younger self, have found themselves isolated.

“It’s an everyday journey; my addiction was mainly an addiction to suffering, so it’s an everyday challenge, an everyday reminder to my past,” he explains. “In my music I want to make sure I touch on a lot of the stuff that I’ve been through, so I can leave that to the next generation to learn from so we can experience it together.

“I had all that fear pent up even throughout my early 20s, but at the same time I think I was meant to experience that, and go through it, and release my music at the right time.

“A lot of people tell me they can relate to 17 Again, just from their own journey or their own battle even though it’s completely different from mine, and that means a lot. To have people relate, that’s a blessing.

“When I was 17 I never would have thought that I could be singing with my life.”

Mama is out now via Island Records Australia 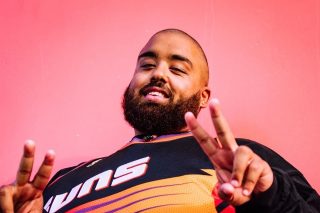