With years of experience in the often male-centric world of jazz, vocalist Kate Fuller and her group The Boys Club are staking out their own corner of the Adelaide music scene – while also gently taking the piss.

“It’s not necessarily other musicians, but the general public perception of female instrumentalists that’s quite interesting,” Kate Fuller tells The Adelaide Review. “On one of our songs That’s A Big Guitar we go into that; it’s a bit tongue in cheek and funny, but it came out of a conversation we were having about how [bandmates Kyrie Anderson and Bonnie Aué] are both treated as instrumentalists.”

Fuller has spent over a decade studying and performing jazz in Adelaide and the United States, but it was crossing paths with drummer Kyrie Anderson, a percussionist whose work with the Bearded Gypsy Band and Kaurna Cronin has taken her all around the world, and original bassist Alana Dawes that set her on the path to her most fulfilling project to date.

“We had played in heaps of different jazz bands and ensembles and things, and we all ended up having a drink one night at the Wheaty, just chatting about women in jazz, and how it’s really great when we get to play with each other, and how we’re often the only woman on stage in a lot of the bands we play in. Then we were like, ‘hmm, maybe we should get together and play?’.”

With a repertoire that included songs like Dinah Shore’s It’s So Nice To Have A Man Around The House (1950) and Billie Holliday’s Mon Homme (1951) – all songs that explore ‘complicated’ relationships with men – the group’s gently subversive twist eventually took on a more solid form as they completed their debut EP I Like Men in 2018.

“We didn’t call ourselves The Boys Club at that stage, we ended up going into record the EP at Wizard Tone with Adam Page and Jarrad Payne, and I think Adam asked, ‘what do you call ourselves?’, and I just sort of jokingly said ‘Kate Fuller and the Boys Club’. He pissed himself laughing and said ‘that’s perfect!’, so we kind of went from there. We didn’t start out to be a political statement, it just happened by osmosis I suppose.”

“When she walks in to the venue, they’re like ‘are you the singer or the groupie?’”

With Dawes’ leaving Adelaide for the UK soon after recording, Fuller and Anderson recruited Aué on bass, who has proved a perfect addition to the group’s sound, a minimalist set up of vocals, bass and percussion that Fuller likens to “a conversation”. In February the group will launch their new EP That’s A Big Guitar at the Adelaide Fringe, with material including a Nick Cave-style murder ballad inspired by a Kapunda ghost story, and – just for good measure – two of the great tributes to the daily grind: Dolly Parton’s 9 To 5 and The Easybeats’ Friday On My Mind.

In addition to penning one of the songs on new EP, Aué ‘s experience helped inspire the aforementioned title track: a bluesy, eye-rolling roll call of some of the bizarre comments the trio have received while performing. “They definitely have some funny stories; even chatting with them I’ve reflected on my career over the years, and playing for older crowds where some things are said and you think, ‘oh, that was a bit wrong’. Getting referred to as the ‘chick singer’ or the ‘beauty’ on the stage, not really being considered for my musicianship, but as the ‘token female’.

“Kyrie she tours a lot with bands, and she’s often the only chick in the band. And she’s had before when she walks in to the venue, they’re like ‘are you the singer or the groupie?’”

Such matters are less of an issue when playing with The Boys Club, but Fuller is agnostic as to whether it’s the gender makeup of the group or their easy rapport that has made the project so rewarding.

“From my perspective as a singer it’s quite different, but I don’t know if that’s just because its women or because it’s something we’re all owning together… but I feel really supported and I feel like I’m much more able to relax amongst the girls,” she says. “And that’s probably because we’ve formed a friendship as well; it’s probably the first time in my career that I’ve had a band, all working on an equal platform and contributing.”

It’s for this reason that Fuller, despite all the playful satire, is circumspect about the broader state of local jazz.

“I think the jazz scene in Adelaide probably has been a bit of a boy’s club, but probably for the same reason we enjoy playing together: we’re mates, and you want to hang out with your mates and that ends up sometimes being a man’s club. But I feel like the jazz scene has been pretty supportive.

“That’s what I’ve found by working with the girls – it’s actually just about hanging out with people you want to jam with.” 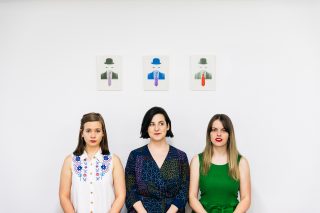