Roomful of Teeth explore all the 'colours' of the human voice

Soaking up an omnivorous mix of sounds from yodelling to hard rock, US vocal ensemble Roomful of Teeth are reshaping audience expectations of the human voice – just don’t call them a choir.

“We’ve all become fairly fond of the term grit in the voice,” Roomful of Teeth artistic director Brad Wells tells The Adelaide Review.

Before co-founding the group in 2009, Wells had grown dissatisfied with the strictures of conventional vocal music while studying classical voice, composition and conducting at college.

“I think I what I was finding a little frustrating over time was an expectation that the voice in new compositions was typically a sort of classical, as in bel canto or western operatic, sounds as opposed to, you know, anything,” he says, citing guitarists in new music ensembles who have swapped their nylon-stringed acoustics for electric guitars and effects.

“So in some ways it was a desire to keep up with that musical vernacular, but it was also just excitement around the things we were learning, about how the voice works in different singing traditions both in the west and otherwise.”

A decade on, Roomful of Teeth have carved themselves a niche as one of America’s most interesting contemporary vocal groups. In 2012 they won a Grammy for their debut album, a record that featured Partita for 8 Voices, a suite written for the group that won founding member Caroline Shaw the 2013 Pulitzer Prize in Music – the youngest composer to claim the prize.

One of the group’s defining features is its embrace of sounds and practices that fall outside the classical canon – the musical equivalent of challenging traditional western beauty standards, perhaps. Part of this work includes enlisting expert teachers from around the world to explore techniques from Tuvan and Inuit throat singing to Korean Pansori. This helps to inform the group’s curious and ever-evolving blend of styles – snatches of spoken word give way to huge oscillating chords, peppered by call-and-response hocketing and the occasional belting spree.

“One of the first techniques we studied was yodelling, which happens in traditions all over the world, this break between registers,” her says. “It’s something that I wanted to start with, because it’s so anathema to classical singers – classical singers are taught to sing as smoothly as possible from the top to the bottom of their range. That’s one of the things that makes classical singing so impressive, when they can do that really well.

“But I also love the sound of the voice breaking intentionally, or sometimes unintentionally, and that difference in colour. We have pieces where a composer has written for three or four singers to go from chest voice to head voice, or chest to falsetto, at the same time, but to different notes. So it’s almost like writing for a bunch of brass players to put in their mutes at the same time or something.

“You get these exciting colour possibilities that composers can take advantage. I don’t know if it’s changed but we’ve become more seasoned in this multi-colour flexible approach to the voice; what especially interests us is the grey areas, the sounds that individual singers can find that are not necessarily a throating sound, and not necessarily a classical sound, but something that person has found – an in-between – that they wouldn’t have been able to find without a teacher.”

Inevitably this kind of approach invites questions of cultural ownership and appropriation, a necessary and ongoing conversation currently playing out across fiction, art and music. Indeed, a 2019 New Yorker profile helped galvanise criticism from indigenous performers for the group’s use of Inuit and Tuvan throat singing techniques. In the wake of such critiques, Wells is particularly mindful of acknowledging the role of the group’s teachers, and the group’s efforts to avoid sounding like a jukebox of ‘exoticised’ pastiches from around the globe.

“Of course none of [these techniques] are new, that’s something we have to continually remind ourselves and people we talk to; this is our experience and it’s easy to feel like we’re in a cafeteria tasting and sampling. [But] it’s not how I think about it; it’s not how the group experiences it.

“One of the most mind-blowing singing traditions that we’ve learned about that nobody in the group was aware of to my knowledge was Korean Pansori, which is this classical style that has existed for a number of centuries. It’s such a reflection of that culture, and it brings a kind of theatricality to pathos and some of the guttural and rougher sounds of the voice, but they’re deemed as beautiful or expressive, and when you hear these master Pansori singers sing, it’s such a powerful thing.”

In their exposure to to such sounds and traditions, the group hope to shake the expectations of what a group of singers can make together, for its members, the composers they work with and its audiences.

“Although in some ways we’re a vocal or chamber choir, but because the group all sings as individuals, they’re all individually mic’d, we always sing amplified and we perform our own music, we don’t categorise ourselves as a ‘choir’. Just because it implies a kind of homogenous sound, a desire to blend and a kind of smoothness, politeness, formality. 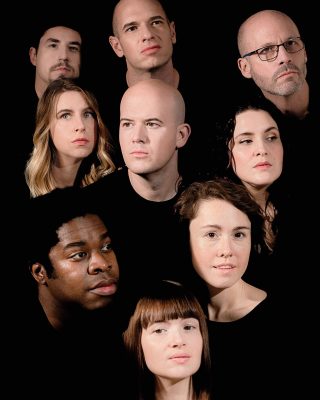