“You guys want some more sad cowboy music?” Natalie Mering asks the audience midway through her first, sold out show in Adelaide. It’s a rhetorical question, obviously, because who here wouldn’t?

At 9pm we find a younger-than-usual Adelaide Festival crowd killing time in the Festival Centre foyer, demographically distinct from the experienced festival-goers who file out of the Dunstan Playhouse’s evening session of The Doctor. The doors remain shut past the scheduled start time, apparently due to flight delays that prevented Weyes Blood from sound-checking earlier in the day. With makeshift venue The Workshop nestled in the bowels of the Festival Centre, Mering and co had to ‘tiptoe’ around until the festival’s theatrical centrepiece concluded.

When we are given the all-clear, we enter a space hemmed in by printed matte paintings of a jungle setting that complement the taxidermied animals festooned from the ceiling. Outrage-managing signs hastily tell us the stuffed tigers, lions and zebras aren’t real, and they appear to be recycled from artistic director Neil Armfield’s 2013 Opera Australia production of The Ring Cycle. While organisers might have been shooting for a kind of Graeme Base-inspired Garden of Eden, in the end it all seems a bit of an afterthought. This lack of clear intent leaves some room for interpretation, such as last week’s Adelaide Writers’ Week opening event in which author Tyson Yunkaporta likened it to a kind of imperial nightmare. In such a context it did evoke the private menagerie of some pith helmet-wearing coloniser, but on this night, with this crowd, it’s closer to one of those Instagram-baiting indoor plant warehouse sales.

Mering takes to the stage in an excellent white pantsuit to sing A Lot’s Gonna Change, the pensive opener to last year’s Titanic Rising. On record, Mering often channels a kind of nostalgic baroque pop, and like many contemporary artists in that vein her vocals are often double-tracked, closely delivered, coated in reverb. But as she sings and sways onstage, holding the microphone aloft, we get a much fuller picture of Mering’s incredible voice, which rings out crisp, powerful and with perfectly poised vibrato. Bassist and backing vocalist Eliana Athayde proves a well-matched accompanist as Mering sings winding melodies that, in a certain Joni Mitchell-inspired fashion, seem to take the scenic route from chord to chord.

Mering’s band neatly recreate the rich pop sound of her records, which themselves are a loving tribute to the clomping piano chords and laidback 4/4 drumming of a generation of post-Beatles singer songwriters. A special mention must go to keyboard player Walt McClements, for no other reason than being only the third Walter under the age of 60 I have encountered in my entire life.

Highlights from Titanic Rising and its predecessor Front Seat to Earth come thick and fast, from the searching Do You Need My Love (complete with vaguely ‘prog’ inspired mid-section) and the upbeat Everyday. Midway through, Mering takes a straw poll to see how many of the audience believe Stanley Kubrick filmed the moon landing (reassuringly few), before going intergalactic with Andromeda, a key track from Titanic Rising that contains, for my money, the slide guitar moment of 2019.

Later, she reflects on the Democratic primaries unfolding back home in the US. “This song goes out to Bernie Sanders, goddamnit,” she says, thoroughly feeling the Bern. “We sent our absentee ballots, we did what we could, we do what we can. This songs called Wild Time because this is a wild time.” It’s true.

Midway through the show she takes a quiet moment to dedicate Picture Me Better to her late friend, the musician Sam Mehran, who briefly lived in Adelaide as an adolescent and died in 2018 at the age of 31. Like many of Mering’s songs it touches on a difficult-to-define sadness; for lost friends, a dying planet, an innocence that can never be recaptured, the difficult-to-reconcile tension between youth and doom. But, with this context, the feeling is even more acute.

During her encore, Generation Why sees Mering and her band mournfully spell out the dated internet acronym Y.O.L.O. in harmony, and like many of Mering’s daggy jokes, her rock-poses-in-the-mirror stage presence and occasional heavy metal hair whip, it’s simultaneously, winkingly knowing, and deeply felt and sincere.

She follows it up with a cover of Forever Young – the Alphaville version, she stresses, not the 2005 cover by Sydney’s Youth Group made famous on The OC. She wonders aloud whether much of the crowd can even remember 2005. This makes me, at 29, feel incredibly old: after all, how could anyone forget Marissa Cooper’s death?

As Mering sings Alphaville’s ambiguous, melancholic mantra of eternal youth, written a few years before her birth, I’m reminded that it’s a phrase and theme that seems to get recycled by every generation from Bob Dylan to Bernard Fanning.

Youth, and its bittersweet mix of emotions, are perhaps as old as time itself. Or at least the 70s. 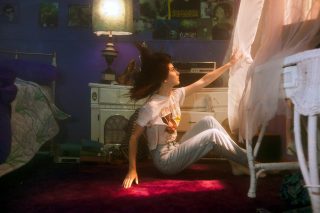