With its 2020 program canned by COVID-19 restrictions, the Adelaide Guitar Festival will bring music lovers an online taste of some of South Australia’s favourite guitar-slingers in new series The Backstage Sessions.

Following the lead of the Adelaide Festival Centre’s similarly pandemic-affected Adelaide Cabaret Festival, which in June celebrated its 20th anniversary with a ‘Bite-Sized & Home Delivered‘ online series of performances and messages from programmed artists, the Guitar Festival this week launches its Backstage Sessions series.

Filmed in the wings of the Festival Theatre, this series of 15-minute sets from local artists will encompass rock, jazz, blues and classical flavours from the likes of Kelly Menhennett, The Tom Kneebone Trio and a collaboration between The Yearlings and festival artistic director Slava Grigoryan himself – seen swapping his usual classical guitar for twang of a Fender telecaster.

“After the loss of this year’s festival, we’ve looked for alternative possibilities for engaging some of our incredible local artists in a series of mini-concerts which capture the intimacy and joy of these rare collaborations,” Grigoryan says.

“This is an initiative which we hope to continue long after social-distancing restrictions are lifted, and we’re seeing our audiences again ‘in the flesh’. We hope you enjoy watching these as much as we enjoyed making them!”

The series is the latest in a small but passionate cottage industry of live video sessions that have popped up around Adelaide since March, from the Woodville Town Hall’s Foyer Fridays to Sunny Side Uploads at The Jade. While the return of live performances to venues like The Gov and Grace Emily means Adelaide audiences aren’t quite as starved for content as they were a month ago, with local arts festivals still up in the air, let alone the broader international music scene, these sessions are likely to find a good home on the smart devices of audiences around the world.

“This month was set to see the biggest Adelaide Guitar Festival yet, with performances scheduled to take place across the state from 1 July to 9 August,” Adelaide Festival Centre CEO Douglas Gautier says. “So to revel in the spirit of the festival that would have been, we’ve created something very special for guitar enthusiasts.

“This is an important opportunity to support South Australian musicians at a time when they have faced significant challenges in making a living out of what they do best. We hope The Backstage Sessions encourages more initiatives to help the local music industry recover from what has been a very difficult year so far.”

New sessions will be streamed weekly from the Adelaide Guitar Festival Facebook page from 17 July to 9 August. 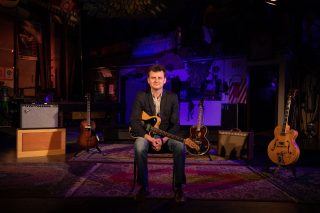