Despite occupying opposite sides of the aisle, the political trajectories of former Prime Minister Julia Gillard and Liberal deputy Julie Bishop bear many similarities. In ‘drag revenge fantasy’ Gone Girls, actors Patrick Livesey and Annabel Larcombe attempt to give them the last laugh.

From a musical of Schappelle Corby’s life to Heath Franklin’s death-defying Chopper, unconventional tributes to real-life figures pepper the annual Fringe program. For Patrick Livesey, the inspiration for Gone Girls came while partaking in that classic pastime of 2010s Australia: watching another leadership spill unfold on the news.

“Scott Morrison came out the winner and there was definitely a bit of shock; I think myself and many others just assumed that Julie Bishop, after years of being deputy, would get up,” he says of the 2018 ‘Libspill’. “And when that wasn’t the case, and it was actually quite an embarrassing loss for her, I found myself asking why and how did this happen?”

He soon began to compare Bishop’s brush-off with another well-known woman in politics publicly repudiated by her party. “I thought it would be funny to link that to what Julia Gillard experienced as Prime Minister, and try to make a fun revenge fantasy out of it.”

“They’re a really interesting platform to have the discussion of who you would or wouldn’t call a feminist,” says co-writer and co-star Annabel Larcombe (Baby Bi Bi), who portrays Bishop opposite Livesey’s Gillard. “They’re two women in politics who didn’t have a lot of other women in their field – Gillard being the first female Prime Minster and Bishop being one of few Liberal women – and it was interesting to see how they would handle that question.”

Other symmetries soon emerged: both spent their childhoods in South Australia and entered politics after careers in law, and both entered parliament in 1998, after John Howard scraped into a second term in government.

This is where Gone Girls introduces us to the newly-elected MPs. “We start in 1998 on day one in Parliament, then we follow their trajectory through politics to the moment that Julie Bishop loses the Libspill – 20 odd years at that point – and the majority of the play takes place in those years.

They were indeed 20 odd years, full of formative events such as the Tampa crisis, 9/11, ‘Kevin 07’, the Global Financial Crisis, the rise of Tony Abbott and Australia’s revolving door Prime Ministership since Gillard fatefully clinched the top job. Looking back over the two decades, Livesey and Larcombe cherry-pick from the historical record to imagine Gillard and Bishop’s behind-the-scenes relationship as these turning points play out.

“Well the main focus was, we wanted to look at being a woman in politics, and what it means to be that ‘other’ figure in this very heteronormative, white patriarchal institution,” Livesey says. “What were the main events that kind of happened in that period? Gillard’s Prime Ministership becomes a big focus point when you’re looking through that lens. But we also wanted to draw out the other events that tie into it, and weave a story that uses all those events that the audience will recognise. That’s the surface level stuff, then we create the fun fiction underneath.”

Gillard’s famous ‘misogyny speech’ of October 2012 has been back in the news after being voted Australia’s ‘most unforgettable’ television moment by readers of The Guardian. Unsurprisingly, it forms a key moment in Gone Girls as Livesey steps back to allow footage of Gillard’s speech speak for itself.

“The most important thing for us was that we gave that speech, and several other moments in our political history, the time they deserve for the audience to remember and reflect on them.”

“Things like the misogyny speech, you tend to view those moments as isolated, you see the speech, then Julia Gillard losing the spill as all being separate,” Larcombe says. “But when you think about her treatment in the media and how much would have been on her shoulders through her whole Prime Ministership to lead to that speech… in the context of those things, it feels even more powerful.”

But with retrospective praise also comes the sobriety of hindsight; while Gillard’s speech has been back in the news, many on social media were quick to point out that earlier that day her government moved to push thousands of single mothers onto Newstart. Gone Girls doesn’t shy away from such contradictions, nor the idea that being a woman in power inoculates one from critique.

“My favourite line in the show is ‘no one’s perfect, not in government’,” Larcombe says. “I think it’s so true, it’s such a hard line to walk. As a citizen we get such a small picture of these people’s lives, so trying to personalise them, see where they’re making compromises and trying and where they’re failing is really interesting.”

And should either Bishop or Gillard turn up in the front row during Gone Girls’ Adelaide run?

“I would die,” Livesay says. 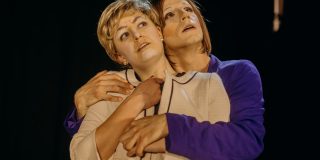