This spellbinding study of, to be frank, death uses puppetry, miniatures, optical and practical effects, shadow play and video sleight-of-hand to create something new and frequently exquisite.

Created by Belgian choreographer Michèle Anne De Mey and her film-maker partner Jaco Van Dormael, and performed by members of the Kiss & Cry Collective, it depicts seven “stupid deaths”, each explained (to a point) by a flatly-spoken but sometimes funny voice-over, and reminds us that, yes, the end is coming to everyone – so we’d better start enjoying life as soon as humanly possible.

With a large screen above the Collective members and their tools and tricks, this allows the audience to see, live and in real time, how what appears on the video stream is achieved, with much of the action played out using… hands. No, not hand puppets: actual hands and often-dancing fingers.

This apparently stems from the earliest incarnations of the show where De Mey and Van Dormael tried out fledgling ideas on their kitchen table and, perhaps, seeing how curiously amusing and strangely pleasing using their hands seemed, they stuck with it.

The deaths we witness vary from the tragic, to the bitterly ironic, to the darkly comic, and beyond, but they’re not visually graphic, with even what should have been a bloody departure subtly visually represented with a red-hued lighting. A particularly macabre interval is also only mentioned via the narration, and the amassed audience laughed instead of being shocked.

Much of it was very moving, and the music certainly helped, with a sequence noting how we all, at a certain age, realise that we’re going to die set to the tune of (what else?) Spiegel Im Spiegel, Lou Reed and an edited version of Bolero turning up later, and a David Bowie classic utilised in its entirety. And was the mention of the magic word ‘pandemic’ thrown in at the last minute just for Adelaide?

It’s certainly true that some out there might find the ‘memento mori’ subject matter here disturbing, and yet this daringly looks deep within our fear of shuffling off this mortal coil and finds beauty, warmth, humour and, believe it or not, comfort.

Hey, maybe this whole dying thing isn’t so bad after all?

Cold Blood was performed at the Ridley Centre, Adelaide Showgrounds on Thursday 5 March 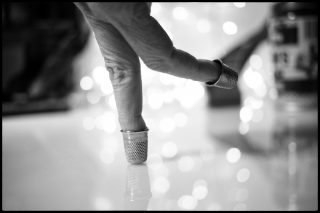