The South Australian Police have eased a March order that forced the closure of wineries and cellar doors around the state – now they’ll be able to resume selling directly to consumers.

Last month the state government announced that following a cluster of COVID-19 cases connected to a wedding at a Barossa Valley winery, wineries and cellar doors had been identified as a “significant risk” for community transmission of the virus. As a result, producers around the state were forced to close to the public.

But while the ban appeared to be aimed at eliminating the kinds of activities that see wineries and cellar doors function essentially as restaurants, the measure also shot down the possibility of wineries continuing to trade on a takeaway basis, like many restaurants, bars and other producers have been doing for weeks. As a result many South Australian winemakers – especially those without robust online ordering systems – lost a valuable economic lifeline.

The ambiguity around the measures made headlines last week after craft brewer Prancing Pony Brewery received a police directive on 9 April ordering it to stop allowing customers to pick up beer purchases and pub food from its Adelaide Hills site:

A subsequent statement from SA Police explained that it was the brewery’s hills location and propensity to “draw local, interstate and international visitors” that saw it affected by the 30 March measures, which were introduced in part to dissuade South Australians from visiting regional areas over the Easter long weekend. For many observers however, the Prancing Pony situation highlighted a lack of clarity around exactly what kind of alcohol-producing businesses are targeted under the measures.

At 11am today, that earlier police order was revoked and replaced by a new one placing wineries, cellar doors, breweries and distilleries on the same footing as restaurants and pubs – these businesses are now able to sell alcohol, food or other goods “on a take away basis”. However, “tastings of any kind” and “consumption of any produce, alcohol or food” remain banned – in keeping with the key objective of the original ban.

As of Tuesday 14 April there have been a total of 433 confirmed cases of COVID-19 in South Australia, with two new cases reported on Tuesday. Of that tally, 253 have officially been cleared of the virus. Readers are advised to consult SA Health’s website for the latest information. 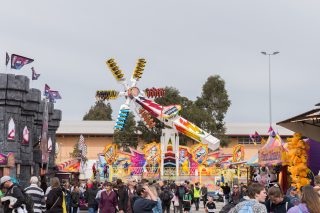