Even as South Australia begins to wind back COVID-19 restrictions, it’s clear that sticky floors and crowded, buzzing venues will be one of the last things to return. A $1 million commitment from the state government aims to help more venues live to see that day.

When The Adelaide Review last spoke to The Governor Hindmarsh in mid-March, things were looking bleak. Shows were being cancelled or postponed daily from Billy Bragg to Angel Olsen, and venues like The Gov – with a 600 capacity band room – were seeing their entire business model collapse in days.

“It was absolutely awful,” Melissa Tonkin tells The Adelaide Review. “Just the pressure of seeing the virus spread around the world, and at the same time bands started cancelling and moving dates. We shut our doors overnight, our income stopped but we had mountains of bills. It was really hard to comprehend – at last count we’ve had 105 bands to date who have cancelled or resheduled.”

Melissa is part of the current generation of the Tonkin family that over 27 years has turned the Port Road pub into a live music institution. It can be a precarious industry at the best of times, but the combined effect of border closures, mass gathering bans and the continually evolving international COVID-19 situation will continue to affect venues like The Gov in ways that won’t be clear for months.

“God knows when international borders will open again,” she says. “So just the element of unknown is what’s so worrying; it’s very hard to plan how to do business when you just don’t know where the goal posts are.”

While the federal government’s JobKeeper scheme supports many of The Gov’s workers, other expenses, from council rates and insurance costs to its network of food and beverage suppliers, continue to mount. “Just because your income stops, doesn’t mean the bills stop coming in,” she says. “We went into debt to pay out our smaller creditors – we understand how important it is for smaller businesses, and a lot of the people we work with are small south Australian businesses as well.

A public distress call from the Tonkin family was issued in April, prompting a petition for government intervention that has gained over 9,000 signatures. Weeks of silence followed, peppered by the foreboding news of venues from city pub The King’s Head to Sydney’s Carriageworks entering administration.

The Gov has stared down the threat of development before, and the successful urban renewal of the neighbouring Bowden precinct has made the Hindmarsh real estate surrounding the venue more attractive than ever. The most pessimistic observers could be forgiven for wondering if this live music heartland could be left to die in sacrifice to the gods of suburban infill.

Today they received an answer: it was the good kind of silence, the one borne of government wheels turning and behind-the-scenes negotiation. The Governor Hindmarsh is now set to receive a $300,000 support package from the state government, part of a wider $1 million fund aimed at supporting local venues through the coming weeks and months until a commercially viable form of live music culture is once again compatible with public health and safety.

“The Gov is an iconic live music venue which hosts international touring acts, national touring acts and is obviously a great supporter of local acts too – but COVID-19 has seen a huge number of shows cancelled or postponed which has had a huge impact on their business,” Minister for Innovation and Skills David Pisoni said in a statement. “South Australia’s music industry contributes $170 million to the South Australian economy and employs more than 2,300 people – this investment in the sustainability of The Gov is an investment in the broader live music ecosystem.”

Because one thing is certain: we’re in for a long haul of incremental adaptation before live music begins to resemble its pre-COVID self. “We were joking about having a masking tape grid to keep everyone two metres apart on the dancefloor,” she says of The Gov’s eventual, presently-undetermined reopening. “But we’ll probably be looking at more of a cabaret format – no dancefloors, we can use JobKeeper to put staff on for table service so people aren’t milling around the bar to order.”

A separate grant from the City of Charles Sturt will also help The Gov mount community-oriented live-streaming from their front bar, while live-streaming shows from the band room will help those who can’t snag a limited ticket to a socially distanced show remain engaged.

While the broader uncertainty remains – having your favourite US or UK artists beholden to the crisis management skills of Boris Johnson or Donald Trump does not exactly inspire confidence – this funding news will at least ensure venues like The Gov will still be around when the ‘rona isn’t.

“It could be a long, rocky road ahead, but this will certainly help smooth the way,” Tonkin says. 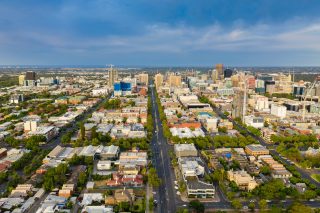