Concerns over COVID-19 travel restrictions in her home country have prompted US artist Laurie Anderson to call off her Adelaide Fringe performances this weekend, while Blue Mountains songwriter Julia Jacklin has also postponed her sold out Governor Hindmarsh show.

The multi-disciplinary artist and O Superman composer was set to perform at Bonython Hall on Saturday and Sunday nights as part of the RCC Fringe program. Today however ticketholders were informed that Anderson has made the decision to postpone both dates to return to the United States as soon as possible.

“She is very keen to get home to New York in case the US issues further travel bans,” RCC organisers explained in a statement posted to Facebook. “We are sad she won’t be performing but respect and understand her desire to get home.”

The news follows yesterday’s announcement that both Adelaide Fringe and Adelaide Festival would continue with this final weekend of programming as planned, in the wake of the federal government’s announcement that from Monday it would be recommending all non-essential organised gatherings of 500 or more people should be postponed until further notice.

After Prime Minister Scott Morrison made the announcement, Tasting Australia confirmed it would be postponing its 2020 event scheduled to take place later this month, the first of many expected cancellations over the coming months.

Blue Mountains singer songwriter Julia Jacklin also confirmed her decision to postpone her sold out Saturday night gig at the Governor Hindmarsh to “err on the side of caution”:

Update (14 March, 11am): The Adelaide Symphony Orchestra has now cancelled its Adelaide Festival Mahler 5 / Adès program on 14 and 15 March, while also foreshadowing its upcoming performance with Ben Folds will also be cancelled. “The well-being of ASO musicians, staff and audiences is our highest priority, and we continue to work with our presenting and venue partners to ensure the health and safety of the wider ASO community,” ASO management said in a statement.

Speaking to The Adelaide Review on Wednesday, Anderson reflected on how “monster events … come into our lives and change everything in a second”:

“[Hurricane Sandy] was our monster hurricane, but you know, whether it’s a monster fire or monster plague, we are suddenly having to confront very large things that are changing everything.

“Some of the teachings that I treasure the most are about change, and how it’s important not to hold onto things,” she says, “because you cannot. And also try to establish a kind of equanimity, so you can bear this. I think it’s true to many of my stories, that idea.

“As soon as you do that, your shoulders can drop, and you go: ‘alright, now what am I going to do?’”

As of Friday 13 March there have been 16 confirmed cases of COVID-19 in South Australia. Readers are advised to consult SA Health’s website for the latest information. 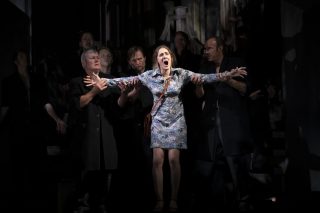