Patch brings theatre back to life: ‘We’ve spent the last 10 years trying to get kids off screens’

Patch Theatre will bring live performance back to the Dunstan Playhouse this week with a 10th anniversary revival of Helpmann-winning show Me & My Shadow. As artistic director Geoff Cobham explains, the landscape is quite different in 2020.

“We were very lucky to get The Lighthouse in during the Adelaide Festival, before we all got shut down on 23 March,” Cobham tells The Adelaide Review. “But it was supposed to tour; we had bookings in Brisbane, Melbourne and a big tour in China which has also disappeared. That’s been really hard for us. We were able to get a little bit of JobKeeper for our cast which was great, and we brought forward a whole lot of creative developments we’ve been working on which has been really exciting.”

Theatre companies around the state, and the world, have spent the last five months grappling with their exile from the stage. Many made the pivot (a word that must surely be retired after 2020) to online programming, streaming recordings of older shows, or developing new works specifically for an online context. Patch, however, made the decision to go emphatically offline.

“We got to use the downtime to be a bit creative,” Cobham explains. “We’re developing a show called Spark, which is a show in a box; it gets sent to a school and unpacked by the teacher and students together.

“Our work is still very analogue … it’s just so nice to have a whole theatrical experience inside the classroom that comes from a simple gift that we send them.”

“We were sort of determined in our response to COVID to not do more screen work – we’ve spent the last 10 years trying to get kids off screens, so it seemed like we should continue that good fight. Our work is still very analogue; we’ve started testing it in schools, and it’s been going really well. It’s just so nice to have a whole theatrical experience inside the classroom that comes from a simple gift that we send them.”

While Spark is set to be further developed in the final term of 2020 before being rolled out more widely next year, Patch will return to the live stage this week when a remount of its award-winning 2010 production Me & My Shadow.

“In the background here, the cast are rehearsing right now,” he says. “It’s very exciting having them back in the room, and they’re very excited to ‘have a reason to get up in the morning’, as they said to me a moment ago – to practice their craft.”

The show, which Cobham himself had a hand in alongside a team of actors, musicians and directors, is a special one for the company. “This show is 10 years old this year, and it’s a very beautiful, special show that many people have performed to I think 64,000 people all around the world – America a couple of times, all through China. It’s great to bring the show back – thankfully in our industry there’s a new audience every three years. People just keep making them for us!

“It’s still looking fantastic, it’s an exciting show,” he says. “It was the first time we’d brought dance theatre techniques to children’s theatre, and it was devised by a team of people in a collaborative style. It wasn’t based on a book or anything, which was a real gamechanger for Patch – a new way of working.”

Social distancing measures – and 50 per cent capacity limits – have seen a reshuffling of sorts as live theatre returns to the city’s performance spaces. State Theatre Company’s upcoming season of Gaslight is now being held at the reopened Her Majesty’s Theatre, leaving Me & My Shadow to become the first production to be mounted at the Dunstan Playhouse since March. An upgrade from the more intimate Space Theatre, it will also allow school groups to enjoy the play while safely distanced from other cohorts.

“It’s an amazing story that three of Australia’s top theatre firms for young audiences are based in this town – Slingsby, Windmill and ourselves – and all three of us tour the world.”

After an Adelaide season in August, Me & My Shadow will tour regional towns including Port Pirie, Whyalla, Renmark, Mount Gambier, Noarlunga and Tanunda in a tentative step towards the national and international touring that was once Patch’s bread and butter.

“We’re assuming that we’ll be touring internationally again in 2022 – we’re not being too ambitious about that,” he says. “We have invitations for next year, but it’s best to assume they won’t happen – let’s hope with a vaccine we can be back to touring the world in 2022.

“It’s an amazing story that three of Australia’s top theatre firms for young audiences are based in this town – Slingsby, Windmill and ourselves – and all three of us tour the world. We see 40,000 kids a year all around the world, amazing numbers, and it’s such a fantastic thing that we get to do that… and it’s real pity that we can’t.”

In the meantime Cobham and the Patch team are content to be back on a stage – even if it is, literally, as a shadow of its former self. 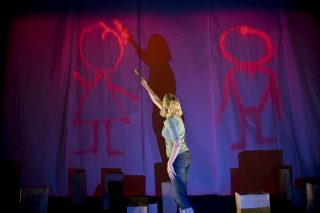