With the State Theatre Company South Australia today cancelling three more shows in its 2020 season, artistic director Mitchell Butel reflects on this past fortnight of upheaval from self-isolation.

Just over two weeks ago Mitchell Butel was ensconced in final preparations at Belvoir for the Sydney premiere of State Theatre co-production Dance Nation on March 17. Today, he’s in self-isolation in Adelaide, where the outlook is quite different.

“As the news was circling we did two previews in Sydney, to two very full houses,” Butel tells The Adelaide Review.

At that stage, the federal government’s then-new COVID-19 measures banning group events of over 500 people had yet to take effect, and with a 330-person capacity, it seemed the Belvoir season might just scrape through.

“We were supposed to open the following night at Belvoir – so it never opened,” he says.

By the next day, not only was the Dance Nation run cancelled, but back in Adelaide the State Theatre Company’s ’s March/April program of The Gospel According To Paul and Single Asian Female were also scuppered as new restrictions on indoor gatherings drew the notably indoor gathering-centric arts sector to a standstill.

“[Belvoir artistic director] Eamon Flack had made pre-show speeches on Saturday and Sunday and said something like ‘we find ourselves in strange circumstances, but the show will go on’. But I guess the important thing, ultimately, was that it’s not the time for the show to go on. Which is counter-intuitive for a performer or theatre person to say.

“The kind of coitus interruptus dimension of it was really strange. I stayed in Sydney for a few days, but then by Sunday, Steven Marshall had made the announcement about closing the borders, so I jumped on a plane the following day and have been in self-isolation ever since.”

Today, it seems lucky Dance Nation’s Adelaide Festival run happened at all, as our festival season managed to conclude virtually unscathed – some of the last arts festivals around the world to do so.

As current measures prompt that initial spate of cancellations to stretch further into the future, enveloping Adelaide Cabaret Festival and Adelaide Guitar Festival, State Theatre have today announced the cancellation of seasons of Euphoria, The 7 Stages of Grieving and The Writer scheduled from May to August.

“But in the context of everyone in the world having a challenging time, you can’t have a pity party about it. Everyone’s in the same boat.

“Safety is the first priority, [and] I think the arts community generally has got on board incredibly quickly with that. I think it was one of the first industries to really embrace, not just the legislation, but the intent behind that.

“But conversely, it’s an industry that’s going to be impacted more than many other industries,” he says. While acknowledging attempts by the state government to cushion the blow through quick response grants, Butel worries the eclectic structure of the arts sector’s workforce means many creatives and support workers still face a difficult few months ahead.

“Equity are running a campaign at the moment called ‘Falling Through The Cracks’, because many crew, actors and creatives because their work is a mix of sole trading, freelance, PAYG, they don’t really fall under the category off long-term casuals or whatever can get the $1500 payment, so its an incredibly hard time for the industry.”

For its part, Butel says the State Theatre is committing to paying artists “over and above” its contractual obligations for cancelled work.

“For those of us who are in the privileged position to be in a salaried arts job, it’s important for us to advocate for the health of those [affected] people, and ensure that the companies are still viable when we’re ready to go so there’s more work for them.

“In the case of Euphoria, all those artists have been amazing, Ashton [Malcolm] and Jim [Smith], Nescha [Jelk] and Emily [Steel], even though the tour’s gone, what can we do? Can we do something online? Can we do a reading? Andrew Howard has composed all this great music, can we do some kind of package?’”

But, he says, such online stopgaps have their limitations.

“I think it’s important to maintain various modes of online engagement for people, and that’s wonderful, but the reality is there’s going to be a huge gap, there’s an absence. Not having live performance creates an absence in people’s cultural lives, so even though everyone’s incredibly motivated to get stuff out there and go ‘keep looking this way, don’t forget us’, the reality is we aren’t perform our central function until we get back there. Which is incredibly sad.

“And as a theatre nerd, and a theatre junkie like myself who likes to see all of this stuff… I have to reframe how I live my life!”

Looking forward, Butel can’t yet say whether the now-five cancelled shows will make it to an Adelaide stage further down the track.

“Certainly with other companies, Melbourne Theatre Company has made a very strong commitment to bringing all its shows back in 2021,” he says. “We’re working through a few of those scenarios, there’s a hope to bring a few of them back, depending on artist availability.

But for the foreseeable future, and certainly until his isolation period concludes in a few days’ time, like much of his audience Butel will have to make peace with solitude – and streaming services.

“For me the primary joy [of theatre] is watching it in the presence of other people, and having a group response to things.

“I don’t think streaming will ever replace that – but hopefully absence makes the heart grow fonder.” 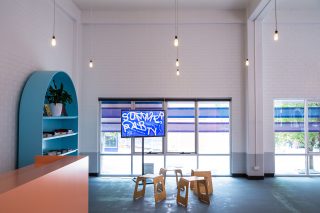